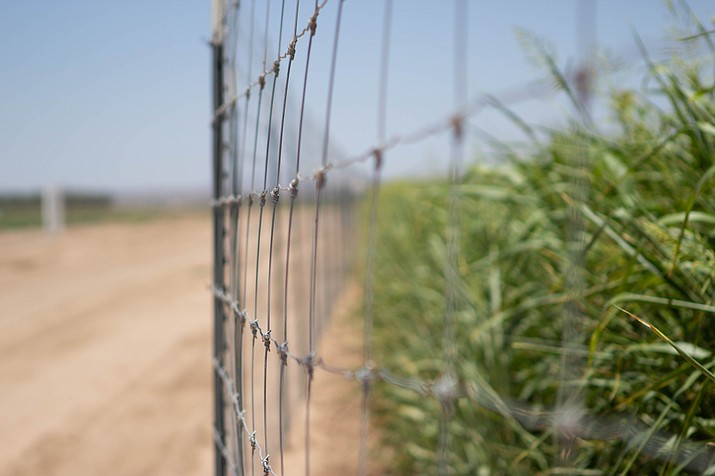 Matt McGuire, general manager for JV Farms, said with 180,000 acres used for agricultural production in Yuma, a sharp drop in demand for romaine lettuce because of an E. coli outbreak could create a lot of wasted crop. (Photo by Conrad Romero/Cronkite News)

YUMA – An E. coli outbreak that sickened people in 35 states and led to a recall of romaine lettuce farmed in Yuma clipped a billion-dollar industry that reaches to Europe, with farmers now working to rebuild consumers’ trust.

“After it was announced that Yuma was the source of the lettuce causing the outbreak, it created quite the destruction to the end of our season,” said Matt McGuire, general manager of JV Farms, which operates farms in Arizona, California, Colorado and Mexico.

“The big downside that happened to us is, you know, we’ve kind of destroyed consumer confidence in our product and what we do,” McGuire said as he stood beside a Yuma field as combines harvested wheat, weeks after the lettuce growing season ended.

The Yuma area produces about 90 percent of leafy green vegetables in the U.S. during the winter season, according to a University of Arizona study. Distribution extends to the international market.

“Last year, because of rain in Spain, we exported quite a bit of lettuce to Sweden and the United Kingdom,” McGuire said.

The E. coli outbreak in March spread to 35 states and led to five deaths and 89 hospitalizations, according to the Centers for Disease Control. With the outbreak likely over, McGuire said the difficulty for farmers, who already are coping with decreasing demand for lettuce, is just beginning.

“We have to get our consumer confidence back, and, hopefully, in time for our fall harvest beginning in November,” he said.

E. coli can take a few days to show symptoms, including nausea, vomiting and diarrhea. The incubation period, diagnosis and treatment time lengthened the reporting span, with nearly 200 cases reported as of the beginning of June.

The last shipment of Yuma lettuce suspected of contamination was harvested April 16, and because of its short shelf life, has since been removed from grocery store shelves, the CDC report says.

McGuire said his farm, which he said was not implicated in the outbreak, discarded about half of the remaining lettuce, which may mean culling produce that doesn’t carry E. coli. But, he said, that’s necessary to regain consumer confidence in the product and ward off competitors.

“Buyers shift their focus to other areas like California quicker than normal, and consumers just stop eating altogether,” he said.

McGuire said with 180,000 acres in agricultural production around Yuma, a sharp drop in demand could mean a lot of wasted food.

This summer, farmers are harvesting durum wheat for pasta and dry grass for hay, but their economic eye is on the start of lettuce season in November.

Agribusiness is a $17 billion industry in Arizona and provides more than 77,000 full-time and part-time jobs, according to the Arizona Farm Bureau.

Agribusiness experts at the University of Arizona estimate that leafy greens contribute $2 billion in annual sales to the state. Arizona Leafy Greens Food Safety Committee, an industry organization, estimates 71 million cartons of lettuce from Arizona are distributed to grocery stores, restaurants and homes in the U.S. every year.

Still, lettuce has been losing popularity.

“Romaine lettuce is definitely still in the doldrums,” McGuire said. “The demand is still low and it’s still being sold from 25 percent to 40 percent of its normal volumes.”

He and other experts said it’s difficult to predict how long it will take lettuce sales to recover.

“Lettuce is already a commodity with a high volatility of price,” said Mark Manfredo, director of the Morrison School of Agribusiness at Arizona State University. “Lots of factors are involved, so a timetable for the economic impact of this is hard to predict.”

Manfredo said the market for romaine lettuce could rise within a couple months or could take years, depending on the swing of supply and demand.

McGuire and other experts said the farming industry in Yuma has weathered previous downturns.

“We don’t grow food to make people sick, and when something like this happens, it is disheartening because all farmers pride themselves on product safety,” he said.

Arizona Leafy Greens has a comprehensive set of guidelines that cover safety measures farmers should have in place, such as training workers to harvest crops, building fences around fields to keep out debris and wildlife, testing water and soil and keeping crops at least 100 feet away from farm animals.

“Mitigation factors depend on the type of animal that your crop is most likely coming in contact with,” said Jeremy Vanderzyl, technical services manager for Duncan Family Farms. “If you have rodents, then you line the perimeter of your fields with traps. If you have risk for deer, then you put up fences.”

“One test that is not required but is a common practice among farmers is the pre-harvest tissue test,” Vanderzyl said. Farmers take a sample of the crop before harvesting and send it to a lab to be tested for E. coli, listeria and other bacteria.