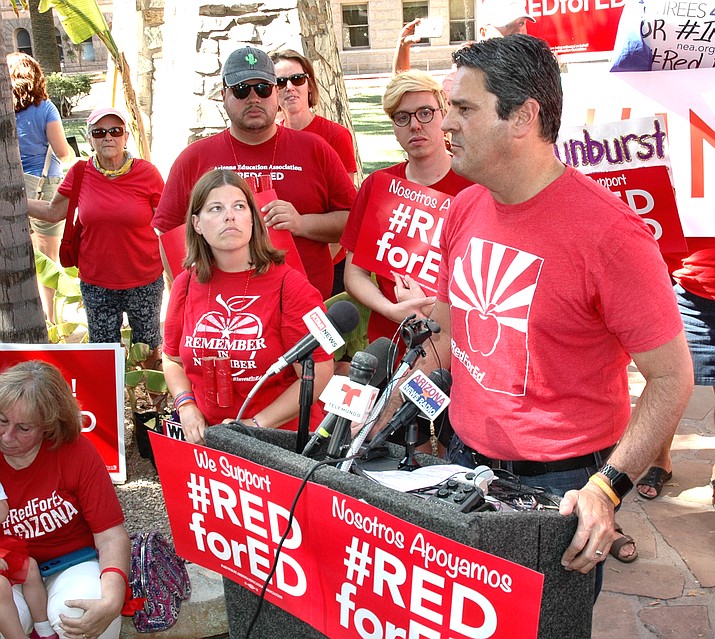 Arizona Education Association President Joe Thomas explains Thursday why teachers and their allies decided the best way to get new money into the classroom was a tax on the richest Arizonans. (Photo by Howard Fischer/Capitol Media Services)

PHOENIX – Supporters of more money for K-12 education said Thursday there's a reason they are taxing only the top 1 percent of Arizona wage earners to pick up the entire cost: It's politically expedient.

"We wanted to know what the voters were going to tell us,'' Arizona Education Association President Joe Thomas said Thursday as organizers of the #InvestInEd movement submitted about 270,000 signatures to put a surcharge on state income taxes.

On one side, he said, the overwhelming response is that any new money should go "as close to the classroom as possible.''

But not on everyone.

Only individuals earning more than $250,000 and couples who file jointly with income of more than $500,000 will pay a surcharge of 8 percent on anything they earn over that amount. The current maximum state tax rate is 4.54 percent.

And those in the $500,000-plus range or couples with $1 million income will pay 9 percent of what they earn above those numbers.

Figures from the state Department of Revenue estimate that the bulk of the estimated $690 million that would be raised would come from about 20,000 taxpayers out of nearly 2.8 million who file tax returns.

Thomas bristled at questions of whether such a system to fund education on the backs of a small minority of Arizonans is fair.

"How is it fair that students are in overcrowded, underfunded classrooms right now?'' he responded.

And that, he said, is what led to the proposal they hope to put on the ballot.

"What we have to do is what the voters will let us do,'' Thomas said. "And the voters said, 'This revenue stream.' ''

Backers need for at least 150,642 of the signatures to be found valid to qualify for the November ballot.

There already has been opposition of a sort. And it has political overtones for Gov. Doug Ducey, who is trying to get reelected at least in part by touting what has been done for K-12 education.

The Arizona Education Project already has spent more than $1 million on TV ads praising Gov. Doug Ducey for the money that was put into education this session, saying that progress is being made in improving teacher salaries. That effort has been funded by allies of the governor, including Pinnacle West Capital Corp., which is the parent of Arizona Public Service, the Arizona Chamber of Commerce and Industry and the Arizona Lodging and Tourism Association.

Separately, the Republican Governors Association, pushing for another four-year term for Ducey, already ran its own services of commercials extolling the incumbent for his commitment to education.

And on Thursday, the chamber unveiled yet another committee, Arizonans for Great Schools and a Strong Economy, which chamber spokesman Garrick Taylor said will spend whatever is necessary to defeat the measure.

Arguments about effects on the economy aside, Taylor said the initiative, if it passes, "actually are putting teacher pay at risk'' because the income of those at the very top of the tax scale is highly volatile.

"The proponents are looking for a stable funding source,'' he said. "This isn't it.''

In fact, however, Ducey contends the state needs no new funding to implement his teacher pay plan – and that anything else this levy would generate would be in addition to the funds on which the governor already is counting. But Taylor said that ignores what he contends would be an economic hit to the state if the top tax bracket becomes 9 percent.

"What the last legislative session proved is that teachers win when Arizona's economy is healthy,'' he said.

Ducey, while not taking a formal position on the initiative, has said he does not favor anything that raises taxes.

Thomas told a rally of teachers and supporters Thursday he expects the campaign to be attacked.

"They will attempt to discredit us,'' he said. "They will say awful things because they want to keep the status quo.''

The #InvestInEd campaign actually is a political marriage of sorts. It originally was pushed by the Arizona Center for Economic Progress as a method of coming up with a sustainable source of revenues for education.

In launching the drive, David Lujan, director of that group, pointed out that lawmakers agreed two decades ago to assume responsibility for new school construction and repairs. But lawmakers reneged on that commitment when tax revenues dipped during the recession.

In the interim, the #RedForEd movement took hold, forcing Ducey to agree to a 19 percent increase in teacher salaries by 2020 and a commitment to restore all the money he and his predecessor, Jan Brewer, took from an account that pays for things like books, computers, buses and some capital needs.

Gov. Ducey doesn’t want to raise taxes to finance education
Teachers lash out at Gov. Ducey for pay raises to aides
Education coalition looking to generate $950 million
Arizona teachers call for a strike; walkout at least a week away
#RedforEd surrenders; teachers should be back at work Thursday