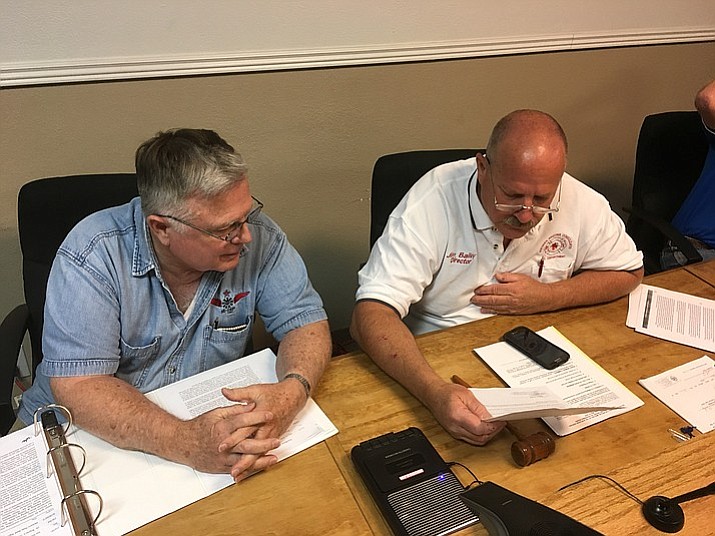 The Northern Arizona Consolidated Fire District board of directors will have a special meeting Tuesday to select a recruitment firm to hire a new fire chief. (Daily Miner file photo)

KINGMAN – A special meeting of the Northern Arizona Consolidated Fire District governing board has been set for 6 p.m. Tuesday at Fire Station No. 31, 2485 Northern Ave., to select a recruitment firm to hire a new fire chief and to appoint a replacement for a board vacancy.

The vacancy resulted from the resignation of board chairwoman Patty Lewis, who resigned after Carl Hayes and Erik Berg were appointed in April to replace Vic Riccardi and Sue Wilkin.

Riccardi and Wilkin were removed from the board being convicted of conflict-of-interest charges regarding mechanical work performed on one of the district’s fire trucks at an auto repair shop owned by Riccardi in Valle Vista.

The appointed director must be at least 18 years of age, be a registered voter and have lived in the district for at least a year. They also can’t be related to any fire district employees.

All letters of interest were to be received by 5 p.m. July 9 and addressed to board clerk Mike Collins, who will open them at Tuesday’s meeting.

Directors don’t get paid, and the term ends this year with elections to be held in November.

Following the appointments of Hays and Berg, the board fired Fire Chief Wayne Eder, whose contract was set to expire in December. Eder was blamed for life safety issues and botched firefighting procedures at fires on Snavely Avenue and Casey Lane.

Eder previously served as NACFD fire chief from 2003-2008 and was rehired in March 2017 to replace Pat Moore. Lewis, Wilkin and Riccardi pushed to bring Eder back, while remaining board directors Mike Collins and Jim Bailey had opposed Eder’s hiring.