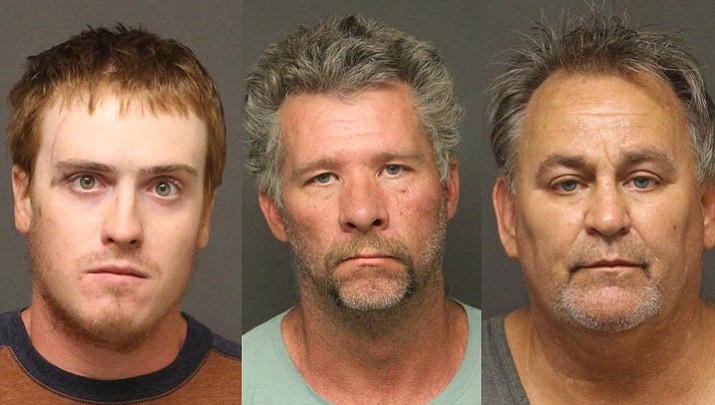 Kingman Police say a noncustodial father was arrested Wednesday after grabbing his daughter from her grandparents as they left Bashas’ grocery store Tuesday.

Gary R. Chamberlain, 41, of Kingman was arrested after KPD officers received several calls Tuesday in reference to a possible kidnapping in progress at Bashas’ grocery store.

At around noon Tuesday, KPD received reports of an adult male, later identified as Chamberlain, a noncustodial father, having grabbed a 2-year-old girl at the store located at 3360 Andy Devine Ave. KPD reported he took the girl from the custody of her grandparents while they were leaving the supermarket.

Police say he then took her to a grey Dodge truck and intentionally struck two vehicles in the parking while recklessly fleeing the scene. Officers located Chamberlain in the 2800 block of East Andy Devine Avenue where he was stopped in his truck. Chamberlain was taken into custody.

Chamberlain had a medical event while in custody and was transported to Kingman Regional Medical Center for treatment. He was arrested at about 9:40 a.m. Wednesday and told officers he intended to take the girl to Texas.

MCSO deputies reported that one of the vehicles, a grey flatbed truck later found to be driven by Dollarhide, quickly accelerated and was drifting outside of its lane. Deputies conducted a traffic stop and asked Dollarhide for the vehicle’s information. He was asked to step out of the vehicle after providing deputies with an expired insurance card.

Deputies smelled an intoxicating odor coming from Dollarhide and conducted field sobriety tests, which indicated intoxication. A breath test revealed a blood alcohol content of .164, according to MCSO.

Dollarhide was arrested on four counts of aggravated DUI and booked into Mohave County jail.

A traffic stop performed Wednesday by Mohave County Sheriff’s Office deputies led to the arrest of 59-year-old Bullhead City resident Raymond James Luetzow, who deputies say had an active arrest warrant, and was driving a vehicle with a suspended registration in which deputies discovered various types of drugs.

The sheriff’s office reports that deputies observed Luetzow’s vehicle, a tan van, traveling near Highway 95 and Hancock Road. Deputies performed a records check of the license plate and found the vehicle’s registration to be suspended, and subsequently conducted a traffic stop.

A records check on the driver, identified as Luetzow, revealed that his driver’s license was suspended and that he had an active arrest warrant. Deputies searched the vehicle and found prescription pills, syringes, and a baggie with about 12.5 grams of methamphetamine.

He was booked into Mohave County jail.

Asking a friend’s son for help to move some things around sounded like a good idea.

MCSO deputies responded to a call June 28 in the 2300 block of Allen Drive in Fort Mohave after the victim reported some missing jewelry after she and her husband had recently moved. The couple enlisted the help of a friend’s son, later identified as Burger.

Burger’s friends also assisted in the move, but it doesn’t appear they were involved in the theft.

An internet search revealed Burger had pawned jewelry items at three separate times since the day of the victim’s move. Deputies contacted the pawn shops and got photos of the items, which were identified by the victim as some of her missing items.

Deputies made contact with Burger Thursday and conducted an interview with him. Burger allegedly admitted to deputies he stole the items and pawned them.

Burger was arrested for theft and second degree trafficking in stolen property.

He was arrested and booked into Mohave County jail.