Nation of Patriots tour: passing the flag to Arizona 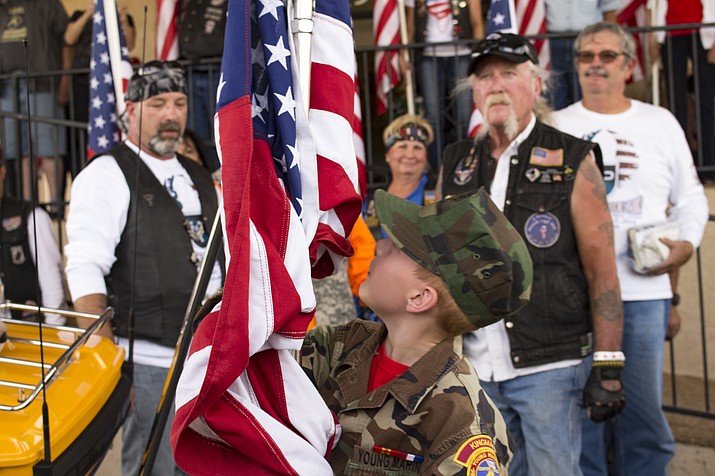 Darius Martin holds the flag that is traveling across the country as the Arizona flag bearer, Dan Smith looks at the flag with pride. (Photo by Vanessa Espinoza/Daily Miner)

KINGMAN – An American flag is traveling through 48 states in 100 days making 100 stops as one state passes it onto the next. The flag flows through the wind as it’s hung on the back of a motorcycle driven by the flag bearer.

Saturday at noon the flag made its way through Kingman stopping at the Elks Lodge #468 as the Las Vegas team passed it onto the Arizona team.

Chuck Lennon, the flag bearer for Nevada and a regional commander handed over the flag to the Arizona flag bearer Dan Smith.

Smith has been the flag bearer since 2010 when he joined the Patriot Tour and has the honor of carrying it again. He is a Vietnam veteran and served under the wing of the Airforce for four years.

Smith wanted to thank the Elks Lodge and how important the lodge is to the Nation of Patriots.

The Young Marines assisted in welcoming the flag to Arizona and Darius Martin, 8, had the honor of carrying the flag inside the Elks Lodge.

The flag is traveling across Arizona to Williams, Payson, Prescott and Flagstaff and making its way to Gallup, New Mexico to pass on to the New Mexico team.

The flags’ journey started on Memorial Day and will end around September 8 at its final destination in Madison, Wisconsin.

The Nation of Patriots is traveling across the country to raise money for wounded veterans and their families. All proceeds go to those who need it the most.