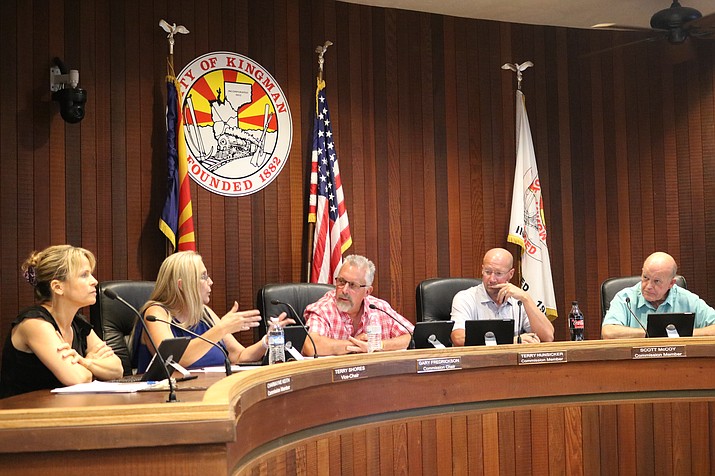 KINGMAN – The Planning and Zoning Commission will continue discussions started at its last meeting regarding on-street parking of recreational and other large vehicles at its meeting at 5:30 p.m. Tuesday in Council chambers, 310 N. Fourth St.

The matter first went before Council in August but no action was taken. Vice Mayor Jen Miles requested that it be placed on the June 5 meeting agenda, and after discussion, councilmembers decided the issue should go to the Planning and Zoning Commission before action is taken.

At its June 12 meeting, the commission considered relevant zoning ordinance amendments should Council decide to ban on-street parking of recreational vehicles, boats and trailers. The proposed change to code being considered by Council includes language that bans RV parking on streets in residential districts except when loading and unloading for a period of 72 hours, and it requires those vehicles to be located behind a 6-foot tall sight restrictive wall if parked on a residential property.

The commission advised reducing the unloading period to 48 hours, and after hearing from the public, was in favor of setting a required distance that an RV must be moved in reference to the 48-hour restriction.

Commissioners also requested that City staff bring back additional information on removing the requirement that RVs and similar vehicles be parked behind some type of sight-restrictive wall. Instead, they advised that vehicles be parked in a side or year yard behind the front plane of the structure on the lot.

The commission at its June 12 meeting began the process of removing a section of the City ordinances that requires a minimum of 6 feet separation between buildings and structures on the same lot. Staff was directed to bring a correlating text amendment to Tuesday’s meeting.