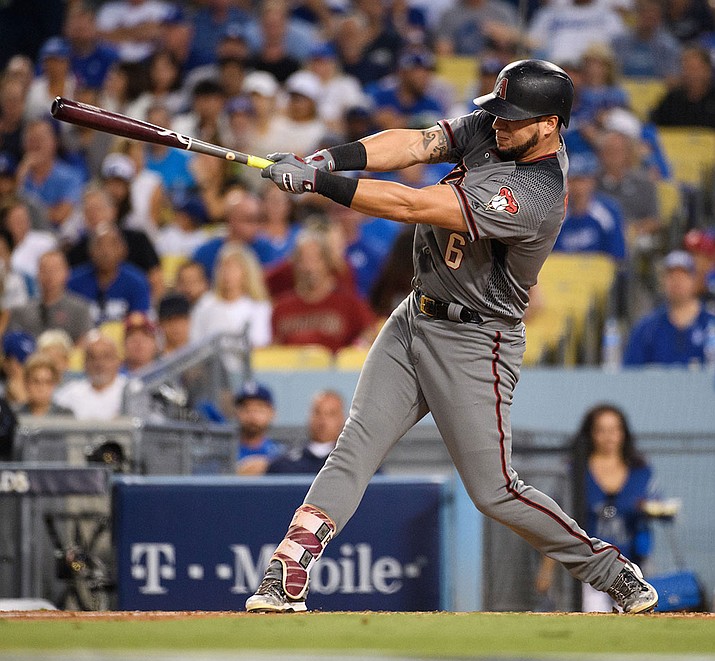 David Peralta hit a three-run homer in the seventh inning Tuesday to lead the D-backs to a 5-3 win over the Rockies. (File photo courtesy of Kelsey Grant/Arizona Diamondbacks)

Arizona was held in check by Colorado starter Tyler Anderson but a high pitch count ended his night after six innings. The Diamondbacks pounced on the Rockies' bullpen in the seventh.

Jake McGee (1-3) walked Jeff Mathis, allowed a double to pinch-hitter Chris Owings before Peralta hit the first pitch he saw into the seats in right to give the Diamondbacks a 4-2 lead.

Pollock hit a solo homer later in the inning off Scott Oberg.

The big inning wasted another strong outing for Anderson. He has allowed just one run in his last three starts, two of which have come at Coors Field. He has a 0.45 ERA since losing to the Miami Marlins on June 23rd.

Nolan Arenado hit his 23rd homer off Archie Bradley in the bottom of the seventh, tying him for the NL lead in that category. The Rockies put the tying run on first but Andrew Chafin retired the last two batters to end the threat.

Randall Delgado (2-0) tossed 1 2/3 innings in relief of Patrick Corbin to get the win. Brad Boxberger pitched the ninth for his 22nd save.

Rockies: OF David Dahl (broken right foot) took batting practice Wednesday. Dahl has been out since June 1 after fouling a ball off his foot against San Francisco.

Diamondbacks RHP Shelby Miller (0-3, 9.00) makes his fourth start Wednesday since returning from Tommy John surgery. He will face Colorado RHP German Marquez (7-8, 4.92), who is 2-0 with a 1.29 ERA with 14 strikeouts and no walks in his last two starts.