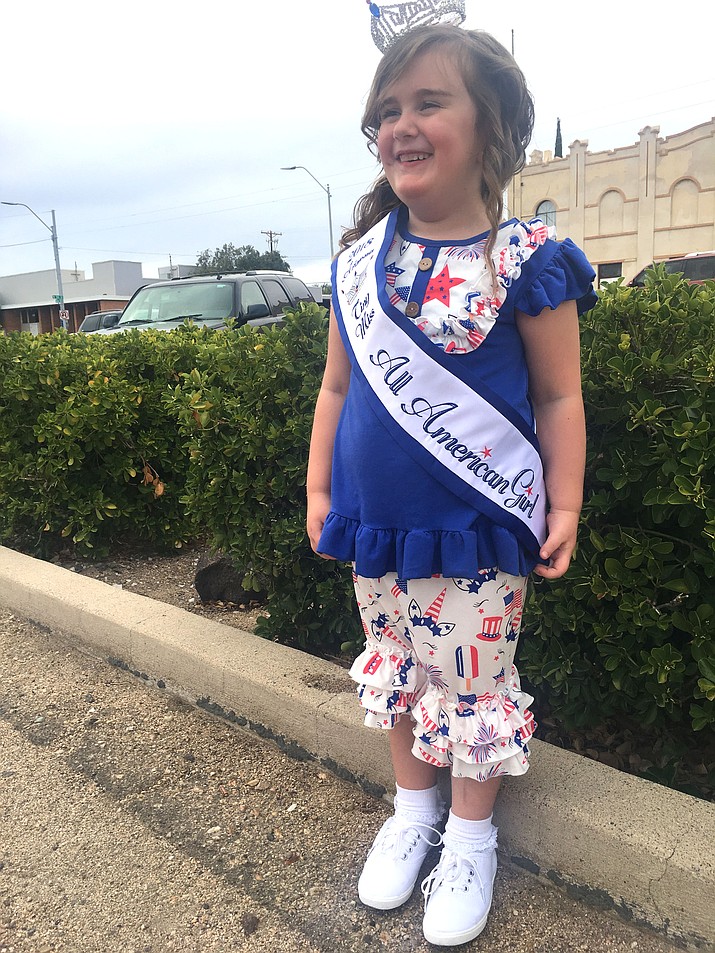 Arianna Heinze, 5, is competing in Las Vegas toward the end of July and hopes to bring home another crown. (Photo by Vanessa Espinoza/Daily Miner)

Females of all ages spend their time in beauty pageants to showcase their style, poise and grace. Beauty pageants start as little as babies and work their way up.

Arianna Heinze, 5-year-old Kingmanite, has been competing in pageants for the last two years. But it’s not like the pageants seen in movies or TV shows where girls go above and beyond on the glitz and glamour. Arianna competes in a natural beauty pageant called Arizona All-American Girl Tiny Miss.

She has been the Arizona queen for the last two pageants under the Tiny Miss and now the Mini Miss division.

“She loves it. She absolutely loves it, she’s shy at first,” said Tara Dowling, Arianna’s mother.

Once she gets comfortable with the people around her she opens up. Dowling decided to enter Arianna in the pageant world because of her natural beauty.

“Really her beauty. She’s so beautiful,” Dowling said. “She’s natural and she has that natural beauty about her.”

Besides Dowley entering her daughter in the pageant world because of her natural beauty, she entered Arianna because she thought it would be a great way to meet friends prior to her entering school.

“She was just really eager to have friends. I thought that would be a safe environment,” Dowling said.

During Arianna’s competitions, when asked how she feels being there, she provided the Daily Miner with a thumbs-up indicating her enjoyment of the pageant world.

The judges base the winner on their personality and natural beauty. Contestants aren’t allowed to wear makeup or anything that enhances or alters their looks.

Contestants go through an interview process, playtime, casual wear, party wear (formal attire), talent, and liberty girl. Liberty girl is won by those who raise the most money for the cause the pageant supports. The All-American Girl pageant sponsors and supports Autism Speaks.

During the duration of the competition they have little parties and fun activities for the girls to enjoy, such as a pink party, pajama party, red white and blue party and big dinner banquets.

The pint-size-beauty queens don’t only receive a crown as the grand prize but can win pageants that will go toward future pageant expenses.

The overall cost of the pageant is $1,000. The pageant does encourage the contestants to have sponsors and sell advertisement pages. If the contestants sell five ad pages or more then they have the opportunity to go on the All-American Girl international cruise.

Arianna has had luck of having Mohave Truss construction, owned by her grandfather and uncle, sponsoring her during competitions. Travis Lingenfelter’s vitamin shop, the Right C, has also donated to her pageant funds.