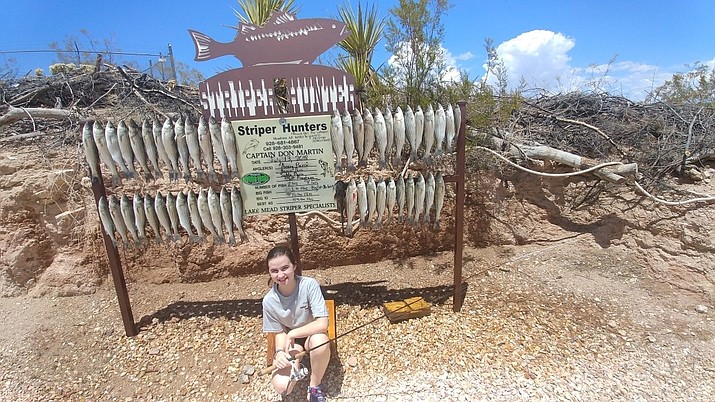 Avery Paris, 12, shows the 50 fish she caught on a recent trip to South Cove on Lake Mead. According to Striper Hunters owner Don Martin, that is the most fish ever caught by an angler 16 years old or younger on his trips. (Photo by Don Martin/Special for the Daily Miner)

I don’t think it is a secret that the best time to fish for striped bass on Lake Mead is during the dark of the moon phase in the months of May, June and July.

Last week the moon was dark and as a result the lake produced some spectacular fishing like I have never seen before in my 12 years of operating a fishing guide service on Lake Mead out of South Cove.

Even with inclement weather and lowering water conditions, the striper bite just seemed to be wide open for those anglers willing to go out from sunset to sunrise.

The reason I believe this past week was so great, besides the fact the moon was absent, was due to the use of the submersible HydroGlow lights I use. These 4 foot LED lights – that emit a green light – attract plankton, one cell organisms that small minnows in this Colorado River lake feed on. The plankton and minnows are attracted to the lights and then the stripers start to come in for a food fiesta. Add in the liberal use of the special chum I use that I affectionately call “Don’s Secret Sauce” that just might also have some effect on the stripers and catfish. We quite often find the chum in the stomachs of the fish –especially the catfish that are caught.

Taking advantage of the dark of the moon week was a number of anglers from all over Arizona who came to Lake Mead to try their luck.

And for those that got out and fished, they were well rewarded with lots of good eating striper and channel catfish fillets.

The week started when Flagstaff residents Russ Jacoby, his wife Laura, and son Jacob, along with good friend Eric Paterson came out on Monday night.

Even though the weather kept us in Meadview until about 10 p.m., once we got to Schleeter Rock and set up, the bite was on. In just five and one-half hours, our group was able to put 191 fish in the ice chests.

Then on Tuesday night, Russ and Laura were joined by friends Jon Vance from Yuma and Damien Morrison from Goodyear.

We got on the lake at sundown and when we anchored up, it was just a matter of minutes before the fish started to bite. And for one angler, Jon Vance, it was a night of fishing he is unlikely to forget.

Using just one rod and reel, Jon was a fish catching machine, putting one after another in the boat. His previous best day of fishing was when he landed 19 largemouth bass, but he said it took him all day to do accomplish that feat.

This night Jon had 20 in the boat in just an hour or so. But then he just kept catching more and more stripers. At one point Jon asked what the record catch was for an angler for one night? I told him it was 72 fish.

Before the short night would end, Jon set a new record, bringing in an incredible 75 fish.

But he wasn’t the only one who was having a good night. Everyone in the boat was catching a lot of fish and the next morning when we counted, sorted and weighed the fish, we found we had caught an amazing 241 fish, 238 stripers and three channel cats.

In just two nights, two groups of anglers had landed 432 fish from the warm waters of Lake Mead.

But the action didn’t end there.

On Thursday night former Arizona Game and Fish Commissioner Bob Mansell and his 13-year old grandson, Cody Fischer, along with Flagstaff residents Don Rusinsky and Brayden Krall came aboard to test their skills against the stripers and catfish that live in Lake Mead.

Once again, the action started quickly and lasted until all the ice chests were filled. This night, 196 fish were on the ice, 188 stripers and 8 channel cats.

I should add that Commissioner Mansell proved himself to be quite the angler, catching the most fish in the boat that night.

And once again the trip was short as the action was fast and furious and the ice chests filled up quickly.

The three day total was now up to 628, and I assure you, every one of those fish was filleted and will be consumed.

Friday night I was joined by the Paris family from Flagstaff. In our group were Aaron, his wife Sybil and their 12-year-old daughter Avery. Also joining the family was a friend Matt Frantzen.

Once again the action near Schleeter Rock was fast and furious. But for one of the anglers, 12-year-old Avery, it was a night she will never forget.

Avery had never caught more than five fish in one day. But she was an avid angler and her parents told me that she had “grit” and not to be surprised at her passion for fishing.

I decided to add a little incentive to the trip so I promised the young lady one of our T-shirts if she could catch 20 fish during the trip.

As it turned out, I should have set the bar way higher.

For this spunky young angler took to catching stripers after just a few instructions.

Avery, like Jon Vance before her, and sitting in the same spot on the boat, just kept reeling them in much to my amazement.

As the young lady passed the 30 mark her father asked what the record for a young angler was. I told him it was 42 for an angler 16 years of age or younger.

When the trip was over, the young lady had put an amazing 50 fish, 49 stripers and one channel cat, in the boat. Avery had set the record, and yes, I gladly gave her the T-shirt as promised.

But Avery wasn’t the only one who excelled that night. The rest of the boat caught a lot of fish too and in the end, they took home fillets off of 234 fish, 226 stripers and eight channel cats.

In just five days of angling in basically the same area, groups of different anglers with different skill sets had brought in an amazing 852 fish.

Now before you think these anglers have emptied the lake of fish, remember there is no limit on stripers under 20 inches long and a daily limit of 20 fish for stripers over 20 inches long, per person per day.

Lake Mead is grossly overpopulated with these silver, hard fighting and good eating fish that gladly will take a free meal when offered in the form of cut anchovies, nightcrawlers, shrimp and even pieces of squid.

There is still time to get in on the wide open bite at Lake Mead. The only thing you need is a fishing license, bait that is kept frozen under dry ice, a few ice chests with ice to keep the fish on, and the desire to go out after sundown and fish.