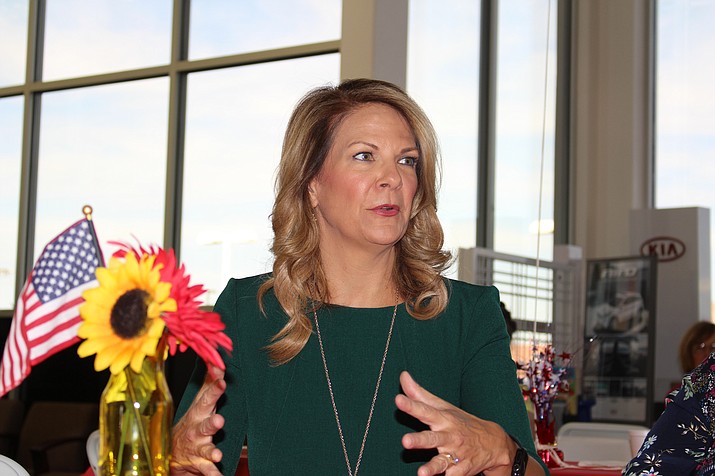 KINGMAN – Kelli Ward has increased her U.S. Senate campaign war chest by about 20 percent with a $500,000 donation from conservative Republican billionaire Robert Mercer of California.

The former state senator from Lake Havasu City is running against Rep. Martha McSally and former Maricopa County Sheriff Joe Arpaio in the Aug. 28 primary for the seat being vacated by Jeff Flake. Polls show her trailing McSally, but ahead of Arpaio.

Mercer, a reclusive billionaire and former hedge fund executive, has emerged as Ward’s major benefactor, giving her super PAC a total of $800,000, according to Politico.com. He also funded her unsuccessful challenge of Sen. John McCain in 2016.

Mercer made a fortune developing early artificial intelligence and was chief executive officer at Renaissance Technologies. He was a big supporter of President Donald Trump and is known for his extreme right-wing causes.

KelliPAC would be using Mercer’s contribution to fund a TV ad casting McSally as insufficiently conservative and attacking her for not endorsing Trump in 2016, Politico.com reported.

Ward’s “Won’t Be Fooled” commercial is backed by a six-figure buy and started airing Monday across Arizona.

Ward is the only conservative “America First” candidate running to replace Flake and is best positioned to defeat Democrat Kyrsten Sinema, a “progressive leftist,” in November, Dow said.

Zachery Henry, press secretary for Ward, said the radio ad is unrelated to the PAC, and he did not know how the Mercer contribution would be spent.

“Mr. Mercer has been supportive of Dr. Ward in the past and believes in what she stands for, but we have no involvement in Kelli PAC activities,” he said in an email.

“Putting a real conservative in the U.S. Senate is critical for the future of our country,” Gosar said in his endorsement statement. “We cannot afford another establishment patsy who promises one thing and votes differently.”

Gosar said he’s known Ward for years and she’s proven that she votes the way she talks. McSally is likeable as a person, but inconsistent politically and likely to fall for whatever the “D.C. elite” tells her to do.

“This election will determine if Arizona has a senator who supports the American people and President Trump or a ‘Never Trumper,’” Gosar said.

Ward’s grassroots campaign is particularly strong in Mohave County, where she first gained political clout in 2012 and continues to build her network through speaking engagements at local Republican clubs and rallies.