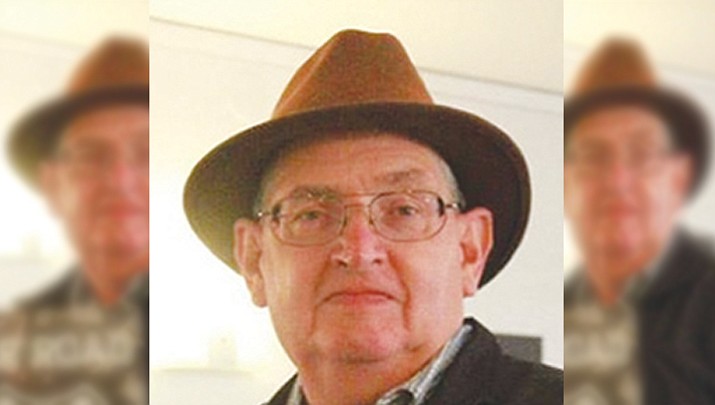 Noted author and Route 66 ambassador Jim Hinckley will be on hand at Chillin’ on Beale Saturday to sign his book, “100 Things To Do on Route 66 Before You Die.” (Courtesy)

KINGMAN – Noted author and Route 66 ambassador Jim Hinckley will be signing his latest book, “100 Things To Do on Route 66 Before You Die,” during Saturday’s Chillin’ on Beale Street car show in downtown Kingman from 4-7 p.m.

He’ll most likely be signing at Diana’s Cellar Door and at the tent with event organizers, in between judging cars. Local band “RockerFellas” are also set to perform at 4 p.m. at Floyd and Co. Real Pit BBQ, 420 E. Beale St.

Hinckley’s Route 66 bucket list includes visits to famous landmarks such as the U-Drop Inn in Shamrock, Texas, and the Blue Swallow Motel in Tucumcari, New Mexico, along with lesser-known spots like Lulu Belle’s BBQ in Ash Fork.

In Kingman, he writes a few paragraphs about Chillin’ on Beale, Floyd & Co. Real Pit BBQ and the Powerhouse Visitor Center with its Route 66 Museum and Electric Vehicle Museum.

“This book is small, but people have asked me what my favorite places are along Route 66, and that’s what this is, a bucket list,” Hinckley said of the book published by Reedy Press and selling for $20.

“Old-timer Route 66 travelers may quibble about a few omissions,” Ron Warnick of Route 66 News wrote in his book review. “But ‘100 Things To Do on Route 66 Before You Die’ is designed as an inspiration for new adventures as well as ensuring one doesn’t miss the essentials.”

Hinckley has written dozens of books about Route 66, one of the most famous roads in U.S. history, and helped organize Route 66 associations in the Czech Republic, the Netherlands, Belgium, Australia, New Zealand and Japan.

In August, he’s traveling to the second European Route 66 Festival to be held in Zlin, Czech Republic, where he’ll be making presentations, attending meetings and helping people plan their Route 66 travels.

Hinckley is also a volunteer for the Route 66 Road Ahead Partnership, an organization that’s trying to designate the highway as a National Historic Trail. The group is conducting a survey to create an updated economic development report, Hinckley said.

In an effort to foster awareness of the national trail designation, the National Trust for Historic Preservation launched a Route 66 road trip in July for writers and photographers documenting stories along the Mother Road. It’s scheduled to come through Kingman July 29-31.

Hinckley helped set up stops for the crew at Antares Point and the Route 66 Powerhouse and Visitor Center in Kingman. He’s also suggesting a stop at Grand Canyon Caverns.

He arranged a lunch and tour Monday at Grand Canyon Caverns for an Australian tour group.