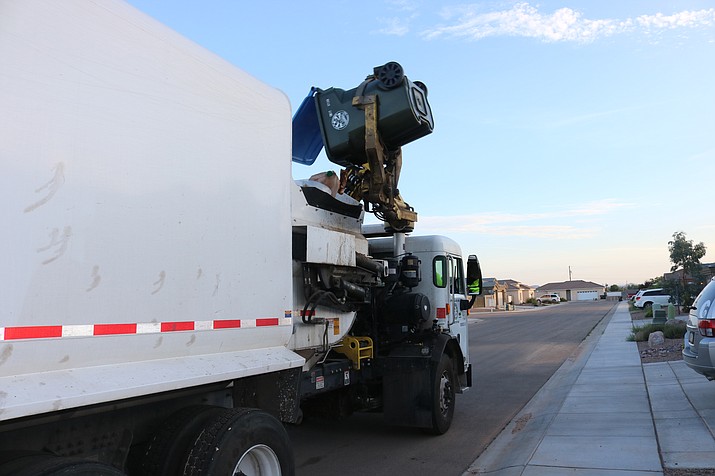 The Clean City Commission has recommended Council stop the curbside recycling pilot program until the recyclables market recovers or upon completion of a sanitation rate and revenue study. (Photo by Travis Rains/Daily Miner)

KINGMAN – Rob Owen, Public Works director, told the Clean City Commission that after months of data accumulation and commission input staff is confident in recommending an end to the curbside recycling pilot program, a notion that was reluctantly but unanimously approved Tuesday.

The matter has been before the commission for months, and although participation in curbside recycling hovered at about 45 percent for the 550 Walleck Ranch and Legacy neighborhood homes used in the pilot, program costs make a citywide expansion unlikely.

Date presented by Owen showed the pilot averaged 6.6 tons of collected recyclables per month from November to May with an average cost of about $3,000 per month. However, the City’s EZ recycling drop program averaged more than 91 tons per month at more than $20,000 in the same span of time.

The drop program is more expensive, but Owen said when taking into account tonnage collected, that it is “highly successful” and more efficient than the curbside program.

The City is currently transporting recyclables to Las Vegas twice a week, with each trip costing about $581. Owen told the commission the issue is further complicated due to a non-existent market for recyclables, meaning the City is by and large paying Las Vegas to take that material as opposed to being reimbursed for it. Owen said the absence of a local Material Recovery Facility is one of the main reasons a citywide program would not be economically viable.

Staff has repeatedly told the commission continuing the curbside program would require that it be expanded citywide. Unfortunately for recycling enthusiasts excited about that prospect, it seems the City isn’t ready for that expansion.

The pilot included 5 percent of the 11,800 City of Kingman sanitation customers. A citywide expansion of the program would cost about $790,000 annually, plus a $550,000 expense for recycling containers. Owen said that would tack on more than $66 each year to City sanitation customers’ bills.

“As a staff I think we’re comfortable, and we would recommend the Clean City Commission forward a recommendation to the Kingman Council to conclude the curbside pilot program, and continue the EZ recycling drop program,” Owen said.

He did note that the City has budgeted a sanitation rate and revenue study for this fiscal year, and that curbside recycling could be revisited upon its completion. Commissioners were supportive of halting the program until that study is completed.

“I think for the time being, discontinue this program until such time that there’s a market for materials and then maybe some kind of a MRF could be set up after the study is done,” said C. Russell, commission chair.