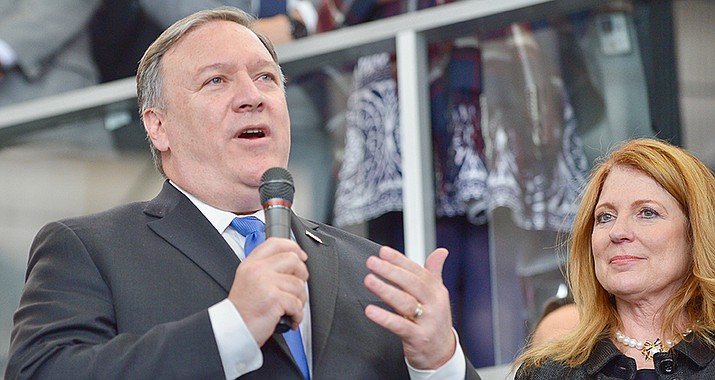 Pompeo issued a statement titled the "Crimea Declaration" in which he said the U.S. will continue to insist that Ukraine's territorial integrity be restored. (U.S. Secretary of State photo)

WASHINGTON (AP) – President Donald Trump's top national security aides sought to fend off accusations the president is too soft on Russia by declaring Wednesday that the U.S. will never recognize the annexation of Crimea and by postponing a second proposed summit between Trump and Russian leader Vladimir Putin.

As Secretary of State Mike Pompeo prepared to face questions about last week's Trump-Putin meeting from the Senate Foreign Relations Committee, the White House said Trump had opted against trying to meet with Putin this fall, as had been announced, and would instead wait until 2019. National security adviser John Bolton cited special counsel Robert Mueller's investigation into Russian interference in the 2016 election as the reason for the delay.

"The President believes that the next bilateral meeting with President Putin should take place after the Russia witch hunt is over, so we've agreed that it will be after the first of the year," Bolton said. The White House said last week that Trump had directed Bolton to invite Putin to Washington for a meeting in the fall. This came amid the backlash over Trump's performance at a news conference with Putin following their Helsinki summit, and many members of Congress had objected to them meeting again in the fall.

In the meantime, Pompeo issued a statement titled the "Crimea Declaration" in which he said the U.S. will continue to insist that Ukraine's territorial integrity be restored. He said the U.S. would hold to its long-standing principle of refusing to recognize Kremlin claims of sovereignty over territory seized by force in violation of international law. And he called for Russia to respect principles it claims to respect and "end its occupation of Crimea."

"In concert with allies, partners, and the international community, the United States rejects Russia's attempted annexation of Crimea and pledges to maintain this policy until Ukraine's territorial integrity is restored," Pompeo said in the declaration, which was released by the State Department shortly before he was to testify.

Pompeo is expected to face tough questioning from committee members about Trump's summit with Putin. Trump has suggested that U.S. opposition to Russia's annexation of Crimea could be reconsidered.

In the declaration, Pompeo took Russia to task for it actions in Ukraine, particularly the 2014 annexation of Crimea.