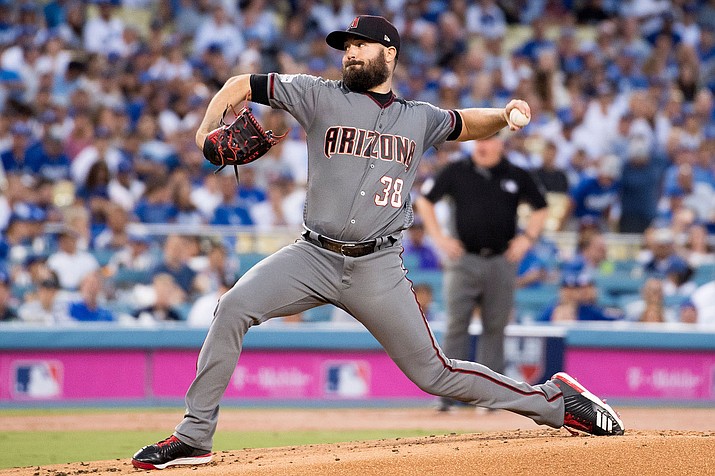 PHOENIX (AP) – A storm knocked out the lights at Chase Field. The Texas Rangers are starting to find a little of their power, even if it is too late.

"We went through a stretch where later innings were a challenge for us," Rangers manager Jeff Banister said. "Late runs are always quality for us and it's a situation where we're seeing some of these young guys grow in their at-bats."

Choo hit a three-run homer off Robbie Ray in the fifth inning and added a solo shot against Matt Andriese (0-1) in the eighth for his sixth 20-homer season.

A thunderstorm outside Chase Field caused some of the lights to go out in the sixth and, after a 21-minute delay, pinch-hitter Willie Calhoun lined a run-scoring single to right to put the Rangers up 5-4.

Eddie Butler (2-1) got the final out in the sixth inning and Rougned Odor hit a solo homer off Andriese in the seventh for the go-ahead run.

Texas, which had 12 hits, has won four straight since losing five of nine, but is still 21 games behind Houston in the AL West.

"It's something we've seen throughout some of the challenges of these games, offensive guys continue to show up, battle through at-bats, find a way to put runs across the board," Banister said.

Steven Souza Jr. hit a three-run homer and Eduardo Escobar had two RBIs in his first game at Chase Field since being traded from Minnesota to Arizona. The Diamondbacks scored one run after the power delay while Texas had four.

"The timing couldn't have been worse," Diamondbacks manager Torey Lovullo said. "I felt like it could have been a different outcome had that not happened. But we've got to make a pitch and we didn't execute."

Ray worked through some traffic in the first four innings before running into trouble in the fifth. The left-hander walked two and Choo lifted his 19th homer over the wall in left for a three-run shot.

The Diamondbacks answered in the bottom half with the help of a throwing error by third baseman Adrian Beltre, going up 4-3 when Souza bounced a three-run homer off the top of the wall in left.

Ray was lifted after a one-out walk in the sixth inning and Texas went ahead 4-3 on Robinson Chirinos' run-scoring single against Yoshihisa Hirano.

Pushing for the playoffs, the Diamondbacks reacquired the 38-year-old sidearmer just before Tuesday's trade deadline from the Miami Marlins for minor league pitcher Tommy Eveld.

To make room for Ziegler, the Diamondbacks shifted right-hander Shelby Miller to the 60-day disabled list.

In other trade news, left-hander Jake Diekman went from one clubhouse to the other in Arizona after being dealt by the Texas Rangers to the Diamondbacks just before the non-waiver trade deadline Tuesday.

Diekman struck out two while pitching the ninth inning for Texas in its win at Arizona on Monday night. Diekman was 1-1 with a 3.69 ERA in a team-high 47 appearances for the Rangers this season.

Texas got right-hander Wei-Chieh (Way-Jay) Huang and a player to be named later from Diamondbacks. Huang was assigned to Double-A Frisco.