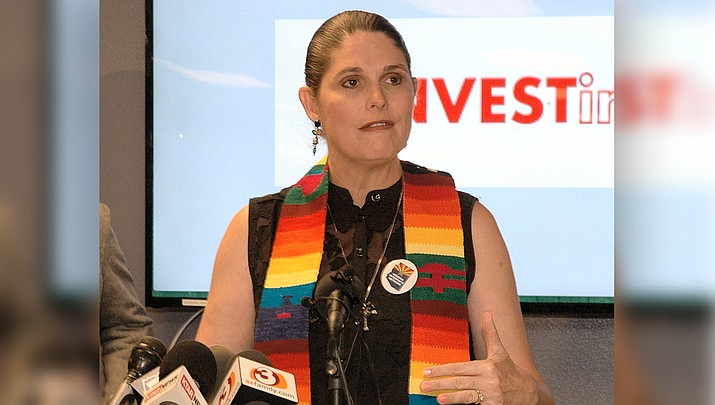 The Rev. Stephanie Hamilton of Tucson details Wednesday why she supports an income tax surcharge to pay for education – and why she sees no problem in putting the additional burden solely on the wealthiest Arizonans. (Capitol Media Services photo by Howard Fischer)

PHOENIX – Organizers of a ballot measure to generate $690 million a year for education are defending their plan to have all of that new money paid by what essentially would be the top 1 percent of Arizona wage earners.

Dana Naimark, president of the Children’s Action Alliance, acknowledged that the plan for an income tax surcharge would affect only individuals making more than $250,000 a year and couples with earnings above $500,000. In fact, the proposed new tax rates would be even higher for single filers in the $500,000-plus range and married couples with incomes exceeded $1 million a year.

But Naimark pointed out that still means the lion’s share of state dollars for education is coming from the state general fund. And the majority of those dollars are raised through the state’s 5.6 percent sales tax, a levy she said has a disproportionately higher impact on those at the bottom of the income scale.

The Rev. Stephanie Hamilton of St. Mark’s Presbyterian Church in Tucson had a simpler explanation for why she sees nothing wrong with the proposal

“To whom much is given, much is required,’’ she said.

The comments came as organizers of what is called the Invest in Education Act released a statewide survey which showed that 39 percent of those asked said they definitely support the proposal with another 24 percent saying they probably would vote for it if it gets on the November ballot. That compares with 21 percent who are definitely against it and 8 percent who are leading that way.

Organizers would not disclose how many of the 150,642 valid signatures they need already have been gathered.

They did acknowledge that the biggest contributor to the cause is the Arizona Education Association but said they would disclose the amounts when legally required later this year.

Central to the issue is whether more money is needed for K-12 education and, if so, how much.

Gov. Doug Ducey and GOP lawmakers have boasted about the plan approved earlier this year to provide enough new dollars over the next four years to boost teacher pay, on average, by 19 percent. There also is a commitment to restore $371 million for things like books, computers and buses that Ducey and his predecessors took away from state aid to schools in prior years.

The initiative is built on two issues.

First is the question of whether the state will have that additional $1 million eventually needed to fund all the promises. Ducey is counting on an expanding economy, though the state’s jobless rate, while better than a year ago, is still higher than the rest of the country.

And even if those dollars are there, education advocates say those new funds still won’t replace all the funds that were taken from public schools in prior years.

The state Department of Revenue does not produce data that corresponds exactly to the tax brackets proposed in the ballot measure.

But it does conclude that virtually all of those new dollars would come from 20,211 taxpayers at the top of the income scale. That’s out of nearly 2.8 million tax returns filed.

But Josh Buckey who teaches 12th grade government and economics at Red Mountain High School in Mesa rejected the suggestion that the initiative amounts to a form of “class warfare,’’ pitting the 99 percent of those who would be unaffected against the 1 percent who would.

“Why is it when we talk about a sales tax that you don’t get the reverse on that?’’ he asked, with people at the lower end of the income scale, in general, spending a greater percentage of what they bring home on that levy than those near the top.

“Why is this dubbed as class warfare?’’ he continued. “I’m going to throw the question back.’’

Anyway, Buckey said, this surcharge is simply “one piece of the puzzle’’ for funding education.

Naimark said the question of the inequity of the current system on the poor extends beyond the current reliance on sales taxes to fund education and the entire state budget.

She pointed out that some of the money that will help fund the promised teacher raises is coming from a new vehicle registration fee. And Naimark said that fee, estimated at $18 “is the same dollar amount, no matter if you drive a 2000 Honda Civic or a 2018 Tesla.’’