Skubal taking the next step in his baseball journey 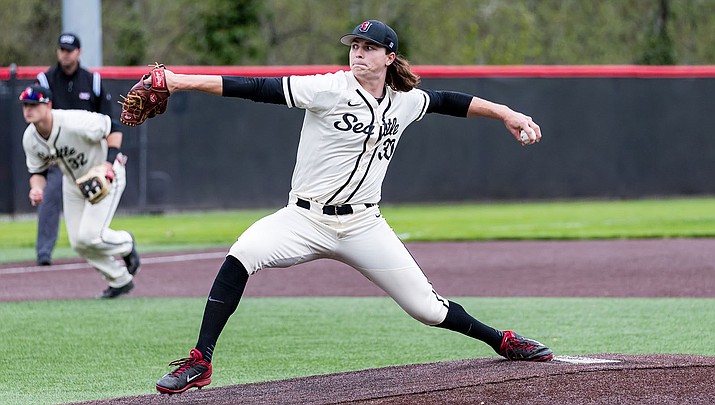 KINGMAN – It’s a no brainer for Tarik Skubal – the Kingman Academy High School graduate isn’t passing on the opportunity to begin his professional baseball career.

Skubal was selected in the ninth round of last week’s MLB Draft and he’ll soon be an official member of the Detroit Tigers’ organization.

“I haven’t signed any paperwork yet, but l fly out to Lakeland, Florida the 18th,” Skubal said of the Tigers’ spring training home. “Then I’ll sign all the papers and start my professional career from there.”

Skubal didn’t hesitate when asked if he would return to Seattle University after finishing 8-2 with 106 strikeouts and a 4.16 earned run average during his redshirt junior campaign.

He added that coming back for one more season resulted in the best year of his college experience and that had a lot to do with his teammates. That was even more evident in his choice to watch the MLB Draft with his roommates rather than make a trip to be with family or host a draft celebration.

Three more Redhawks were selected in the later rounds and that created one final team-bonding opportunity.

“We just kind of hung out and watched it together,” Skubal said. “It was really awesome to be with everyone and experience that together.”

But now with everything settled, Skubal flew home to Kingman Friday afternoon in order to spend time with family and friends before returning to Seattle U for a June 17 graduation. Then it’s off to Florida to begin his MLB journey, but he won’t easily forget his time as a Redhawk.

“There are too many,” Skubal said of his favorite memory at Seattle U. “All the road trips, bus trips and hanging out with the guys in the locker room, 5 a.m. weights, and ping pong in the locker room. It was all a lot of fun. It was a blast for four years straight and I’m glad I went to Seattle University.”

With this chapter of his story complete, Skubal now awaits the next one and it could lead to a reunion with fellow Kingman native Dylan File – who is pitching for the Wisconsin Timber Rattlers.

Only time will tell if the two face each other in the Minor Leagues, but Skubal would enjoy that opportunity.