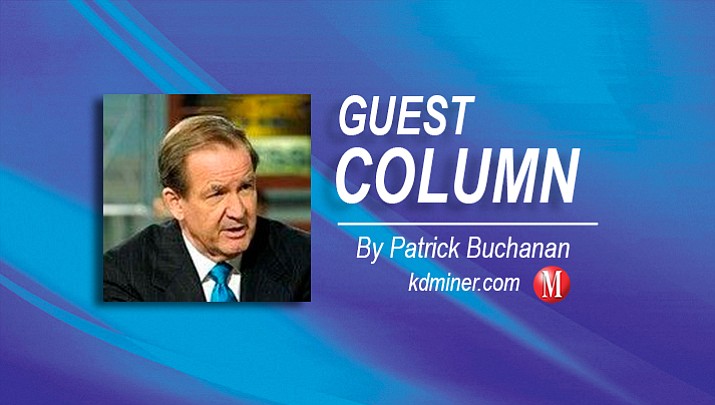 At the G-7 summit in Canada, President Donald Trump described America as “the piggy bank that everybody is robbing.”

After he left Quebec, his director of Trade and Industrial Policy, Peter Navarro, added a few parting words for Prime Minister Justin Trudeau:

“There’s a special place in hell for any foreign leader that engages in bad faith diplomacy with President Donald J. Trump and then tries to stab him in the back on the way out the door. ... And that’s ... what weak, dishonest Justin Trudeau did. And that comes right from Air Force One.”

In Singapore, Trump tweeted more about that piggy bank.

“Why should I, as President of the United States, allow countries to continue to make Massive Trade Surpluses, as they have for decades ... (while) the U.S. pays close to the entire cost of NATO-protecting many of these same countries that rip us off on Trade?”

To understand what drives Trump, and explains his exasperation and anger, these remarks are a good place to begin.

Our elites see America as an “indispensable nation,” the premier world power whose ordained duty it is to defend democracy, stand up to dictators and aggressors, and uphold a liberal world order.

They see U.S. wealth and power as splendid tools that fate has given them to shape the future of the planet.

Trump sees America as a nation being milked by allies who free ride on our defense effort, as they engage in trade practices that prosper their own peoples at America’s expense.

Where our elites live to play masters of the universe, Trump sees a world laughing behind America’s back, while allies exploit our magnanimity and idealism for their own national ends.

A nation that spends more than it takes in from taxes, and consumes more of the world’s goods than it produces itself for export, year in and year out, is a nation on the way down.

We are emulating our British cousins of the 19th century. Trump understands that this situation is not sustainable. His strength is that the people are still with him on putting America first.

Yet he faces some serious obstacles.

What is his strategy for turning a $796 billion trade deficit into a surplus? Is he prepared to impose the tariffs and import restrictions that would be required to turn America from the greatest trade-deficit nation in history to a trade-surplus nation, as we were up until the mid-1970s?

Americans are indeed carrying the lion’s share of the load of the defense of the West, and of fighting the terrorists and radical Islamists of the Middle East, and of protecting South Korea and Japan.

But if our NATO and Asian allies refuse to make the increases in defense he demands, is Trump really willing to cancel our treaty commitments, walk away from our war guarantees, and let these nations face Russia and China on their own? Could he cut that umbilical cord?

Ike’s Secretary of State John Foster Dulles spoke of conducting an “agonizing reappraisal” of U.S. commitments to defend NATO allies, if they did not contribute more money and troops.

Dulles died in 1959, and that reappraisal, threatened 60 years ago, never happened. Indeed, when the Cold War ended, out NATO allies cut defense spending again. Yet we are still subsidizing NATO in Europe and have taken on new allies since the Soviet Empire fell.

If Europe refuses to invest the money in defense Trump demands, or accept the tariffs America needs to reduce and erase its trade deficits, what does he do? Is he prepared to shut U.S. bases and pull U.S. troops out of the Baltic republics, Poland and Germany, and let the Europeans face Vladimir Putin and Russia themselves?

This is not an academic question. For the crunch that was inevitable when Trump was elected seems at hand.

He promised to negotiate with Putin and improve relations with Russia. He promised to force our NATO allies to undertake more of their own defense. He pledged to get out and stay out of Mideast wars, and begin to slash the trade deficits that we have run with the world.

And that’s what America voted for.

Now, after 500 days, he faces formidable opposition to these defining goals of his campaign, even within his own party.

Putin remains a pariah on Capitol Hill. Our allies are rejecting the tariffs Trump has imposed and threatening retaliation. Free trade Republicans reject tariffs that might raise the cost of the items U.S. companies makes abroad and then ships back to the United States.

The decisive battles between Trumpian nationalism and globalism remain ahead of us. Trump’s critical tests have yet to come.

And our exasperated president senses this.