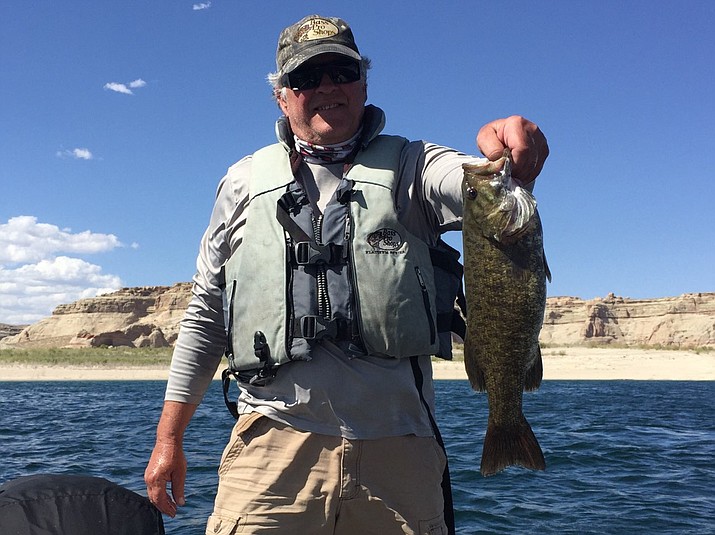 Greg Parker holds a good smallmouth bass he caught during the Kingman Bass Club’s tournament at Lake Powell. Photo special to the Miner.

The Kingman Bass Club held its third two-day tournament of the year, and the dedicated bass anglers in the club drove almost five hours to Lake Powell in northern Arizona to test their skills at this awesome fishery.

According to Donnie Scroggins, president of the KBC, six teams participated in the event. And all were successful.

“Every team that participated weighed in limits both days,” Scroggins said.

The team of Greg Parker and Eric Wolsey had a tremendous first day, weighing in a five fish limit of 20 pounds, 6 ounces. On day two, they brought in a limit that weighed 12 lbs. 1 oz. Their two day total was 32 pounds, 7 ounces.

The next three places in the tournament were decided by less than 5 ounces.

Third place was won by Judson Brown and Mark Evans. On day one their five fish limit weighed 14 pounds, 2 ounces, while on day two they had 15 pounds, 2 ounces for a two day total of 29 pounds, 4 ounces.

Donnie and Ray Scroggins had a two day total of 29 pounds, 1 ounce.

Scroggins had the first day big fish, a largemouth that weighed 3 pounds, 8 ounces. Their bait of choice was jigs, fished slowly on the bottom.

Parker said they had a good frog bite in the morning and then followed up with fishing Hula Grubs around submerged brush in 2-5 feet of water.

“You could literally catch smallmouths on every cast if you were fishing on points,” Parker said about the smallmouth fishery.

Parker said he also caught four walleyes, which was a bonus for him. The walleyes weighed between two and 4 pounds.

“It is a great fishery,” Parker said.

The club’s next tournament will be on Sunday and will be held at Lake Mohave. This is the last tournament for the club until this fall when the weather and water cools down.