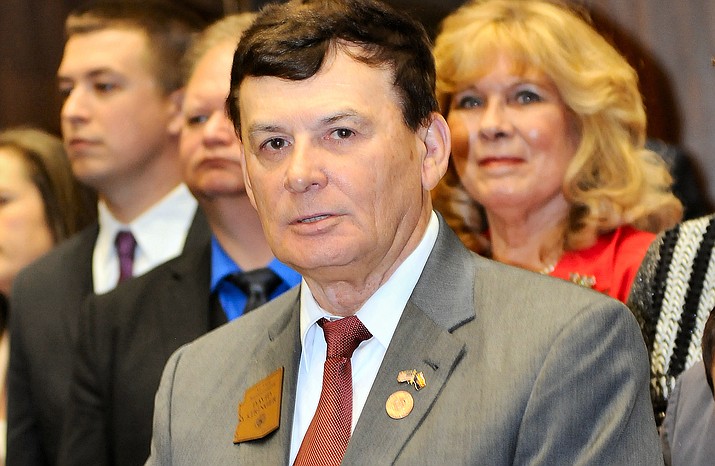 Republican Rep. David Stringer said that new immigrants – especially those from non-European countries – do not assimilate as easily as those who came a century earlier.

An AZ legislator made these overtly racist comments about our students. It's time to remove xenophobic radicals from elected office this November! We deserve leaders who understand we're a nation of immigrants who bring a diversity of experiences & ideas. https://t.co/P5I9QpUHDI pic.twitter.com/NSrJS2WZA3

PHOENIX — A first-term Prescott lawmaker is warning that immigration “represents an existential threat to the United States’’ and needs to be curtailed before the country is irrevocably altered.

Republican Rep. David Stringer said that new immigrants — especially those from non-European countries — do not assimilate as easily as those who came a century earlier.

And Stringer said the rapid influx of Hispanic children has made school integration impossible because “there aren’t enough white kids to go around,’’ not only because of the pure numbers of immigrants but because Anglo parents choose to either move to new areas or simply put their children in private or charter schools.

Stringer’s comments Wednesday, June 14, came after nearly a minute of his 17-minute speech he made Monday, June 12, to the Republican Men’s Forum in Prescott were posted on social media.

Stringer said the comments on immigration, at the end of his discussion of criminal justice reform, were “taken out of context and distorted by omission.’’

But Stringer, first elected to the Legislature in 2016, acknowledged that his remarks were prepared and that his words were meant to be a warning of sorts to his audience which was largely, if not exclusively Anglo, that the country they know is changing.

“I’m telling them, ‘You need to be prepared for this,’” he said.

And Stringer said that he does believe that unless immigration is slowed — and significantly — there will be problems for the United States.

“Before we bring in a lot of new immigrants, we need to figure out how we assimilate the folks that are here,’’ he said.

He said there are “political implications of massive demographic change and displacement.’’

“Remember now: In the United States, people are moving all over the place,’’ Stringer said.

“It’s almost like ‘white flight’ that it constitutes an existential threat to the United States,’’ he explained. “I think we could be facing national dissolution in a decade or two if we don’t get control of the immigration issue.’’

It starts, he said, with integration. Stringer said that requirement, which has its roots in the historic 1954 U.S. Supreme Court decision of Brown v. Board of Education.

“The whole concept of integration is giving minority kids who are typically in worse neighborhoods, not as good a school, the same kind of advantages that white kids have,’’ Stringer said.

“So you integrate them with the white schools and you get a better, more fair result.’’

But Stringer said that is becoming increasingly difficult in a state where he said the “minority’’ population makes up 60 percent of public schools.

“There’s not enough white kids to integrate all these schools because we’ve had so much immigration over a short period of time,’’ he said, leading to “a dramatic demographic transformation.’’

But the issue, Stringer said, is deeper than just education.

“You can’t simply have amnesty after amnesty and not control your borders and continue to remain a viable, unified country,’’ he said. “That’s what I think.’’

Stringer did not dispute that similar claims were made last century — and even before — amid waves of immigration from places like Ireland and Italy.

But Stringer said while “America has been a melting pot,’’ what’s happening now is different.

“It’s been a melting pot for people of European descent,’’ he said.

“So if you’re a Swede, a Norwegian, an Irishman and a Frenchman, after the second or third generation, your kids are all alike,’’ Stringer explained.

“They don’t have any accents. They’re indistinguishable.’’

That’s not true of Hispanics, he said

“Even though they’re affluent, they’re an educated, cultured group, they still have a sense of maybe not fully participating in American life.’’

And Stringer said even African-Americans, who have been here for hundreds of years, “still have not been fully assimilated into American culture.’’

And there’s something else about immigrants from Mexico and points south.

Stringer said there are implications to all that.

“We are increasingly a divided and fragmented people,’’ he said. “That’s what I mean by an existential threat.’’

Consider California, Stringer said, where there is a ballot measure to divide the Golden State into three states.

“When you have too much diversity too fast, it undermines social cohesion and community,’’ Stringer said.

“And that’s where we are in America today,’’ he continued. “That’s why we have so much division and gridlock and tension and friction in our society.’’

All that, Stringer said, goes back to his central theme of slowing immigration.

Video sound may be muted. To unmute, click the speaker icon while playing.