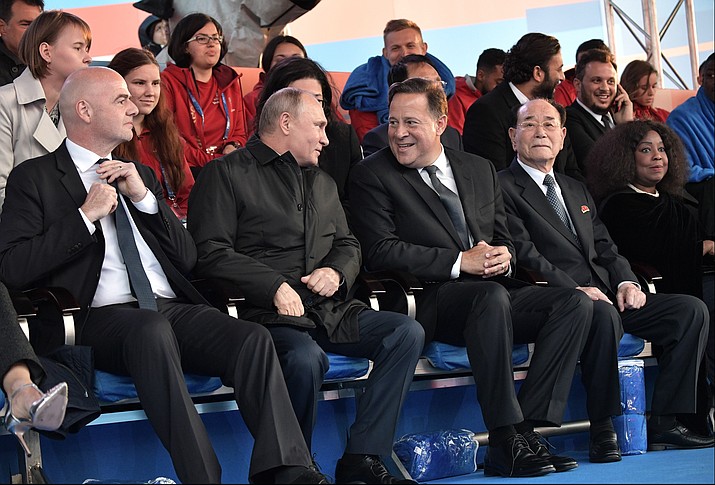 MOSCOW (AP) — Russian President Vladimir Putin claims soccer and politics have nothing to do with each other, yet the World Cup he kicked off Thursday is about much more than sports.

It's about proving to the world that Russia is a global power broker and not an outcast, that it's an open, confident and generous nation — and not an isolated, repressive place hobbled by sanctions.

And the beleaguered Russian team's stunning 5-0 victory in the tournament opener Thursday against Saudi Arabia was just what Putin needed to make the point that Russia is ascendant again. He promptly called the much-criticized coach personally to congratulate him on the unexpected win.

Sidestepping deep divisions between his strongman worldview and that of many Western countries, Putin welcomed fans to his "hospitable" nation by inviting them to "make new friends with people who share the same values."

But critics fear the World Cup will legitimize Putin's autocratic policies at home and Russia's actions abroad, from alleged meddling in the U.S. presidential election to annexing the Crimean Peninsula from Ukraine and a suspected nerve agent attack in Britain. Moscow vehemently denies any interference in the American vote or involvement in the attack against a former Russian spy in Salisbury.

Racism, homophobia, conflicts over Syria and Ukraine — "all these rebukes have no relation to the World Cup," his spokesman Dmitry Peskov said Thursday. "Today the soccer dimension is the most important one."

The monthlong World Cup is also about Putin proving to his compatriots that he's both their best global envoy and a man of the people, who brought the world's most-watched sporting event to ordinary soccer fans in 11 cities across Russia's expanse.

That's especially important for a country that prides itself on athletic prowess but whose last massive sporting event — the 2014 Sochi Olympics — was indelibly stained by revelations of doping so widespread that Russia was banned from this year's Winter Games.

"It's important for Russia to have this (tournament), we can show that we are a global football power," said Moscow fan Dmitry Finapetov, his face streaked with white-blue-red paint, as he nearly spilled his beer in excitement at his team's strong showing at Luzhniki Stadium.

"When I used to travel abroad I would think, 'why can't it be like this at home?'" he said. "But now I travel and I think things are better at home. ... Now foreigners can see that too."

Geopolitics were front and center for Thursday's opener, with Saudi Crown Prince Mohammed bin Salman as Putin's star guest. The two leaders have forged an alliance that has pushed up the global oil price and reshaped the balance of power in the Middle East.

Putin welcomed a "friendly global family" of soccer fans to celebrate the World Cup, but the Kremlin's guest list showed where Russia's allegiances lie: the head of the North Korean upper house of parliament, Lebanon's prime minister and the presidents of Rwanda, Paraguay, Bolivia, Panama and leaders of eight friendly former Soviet republics. Britain's royal family and top politicians are among those who pointedly stayed away.

Electrical engineer Sergei Tabachnikov, who came to Moscow all the way from the Pacific island of Sakhalin for the opening match, welcomed the international scrutiny that comes with hosting an event of this scale and hoped Russia learns something from it.

"Criticism is necessary. It helps us improve," he said.

Russian authorities walked a careful line Thursday between hard-line security measures and a veneer of tolerance.

A British gay rights activist was arrested for a protest action near Red Square, but quickly released. Later a Russian fan displayed a rainbow flag during Putin's speech, despite a broadly enforced law that bans "propaganda" of homosexuality to children. Security forces shrugged it off.

Minutes before the opening match, riot police hauled an unauthorized flag vendor into a police van just outside Luzhniki Stadium as he shouted "Help me! Help me!" and fans filmed on their phones. An officer then turned to the crowd, speaking in English and saying in a calming voice, "Nothing to worry about, go enjoy the game."

British pop singer Robbie Williams also played it safe in the opening concert. He revved up the crowd but diplomatically avoided singing his hit song "Party Like A Russian" — which is rife with stereotypes about Russian extravagance and includes a dig at an unnamed Russian leader who "alleviates" the population of its wealth.

"Football and love" was the theme of Thursday's opening show, as a debate raged among Russian lawmakers about whether Russian women should hook up with visiting fans.

Mostly the mood was exuberant, with Saudi fans taking selfies with Russians in the stadium's corridors despite their rivalry.

Alexander Klimov, who came from the southern Russian city of Stavropol, summed it up by blowing kisses and saying, "Thank you everybody for coming in our country. Welcome to Russia, we love you guys!"