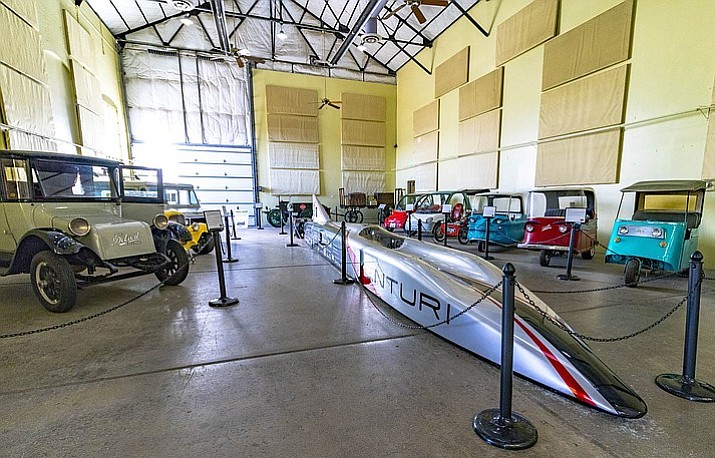 The Buckeye Bullet, designed and built by students at Ohio State University, is one of more than 20 electric vehicles on display at Kingman’s Route 66 Electric Vehicle Museum at the Powerhouse Visitor Center. (Daily Miner file photo)

Cities and towns across America have given themselves monikers “the hometown of” or “the capital of the world.” Kingman has a small corner in this realm because we like to let outsiders know we are the hometown of Andy Devine.

And being known as that is fine and it’s fun. We’ve named our segment of Route 66 after him, and it used to be the the main arterial here, but now it has been supplanted by Stockton Hill Road.

We have our Andy Devine Days, and tourists can see his saddle in the Mohave Museum of History and Arts, which has his movies playing on a continuous loop. Tourists can also walk down Andy Devine Avenue to the Beale Hotel and see where he was raised. Well, at least from the outside.

Kingman is blessed to have Jim Hinckley, who is doing a masterful job of marketing Route 66 for us. However, we don’t have the Route 66 market cornered. There are many other towns and cities that lay claim to the Mother Road, and we can only join them in declaring ownership. Like Andy Devine, Route 66 is a great part of our tourism, but it isn’t able to make Kingman stand out on its own.

We should always be proud of being the hometown of Andy Devine and being a part of the Mother Road, but we’re questioning whether it’s enough. What else can Kingman be known for?

Years ago, Kingman was known as the “Turquoise Capital of the World.” Turquoise mining around here has dwindled, which makes it hard for Kingman to reclaim that name.

The cars are already here, and they continue to come. The Electric Car Museum – in the Powerhouse Route 66 Museum, 120 W. Andy Devine Ave. – just received Dreisbach ElectroMotive’s Demi X-1 that set a land-speed record of 210 mph in 1983. Except you won’t find it in the museum.

It is at the museum’s temporary storage facility at the airport. The museum downtown is out of room and newly donated vehicles are being placed in storage.

Or, if room isn’t found for these cars, we could see them leave and the opportunity to be known for something else with them.

Kingman should pay heed to what Roderick Wilde told the Daily Miner in March.

“Personally, I would love to have our museum stay in Kingman,” the museum founder said. “Kingman has been great to us. If we are not able to make it happen here, we will not give up on pursuing our goals.”

Another town along Route 66 will jump at the chance to become “The Electric Car Capital of the World.”