Sit a spell and have a chat 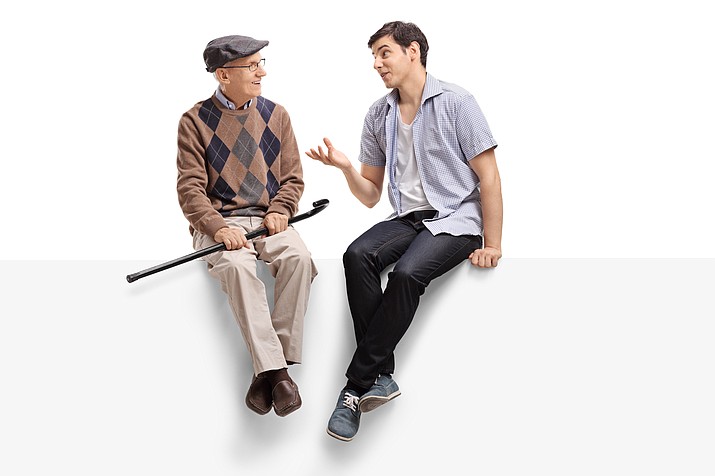 Take the time to chat with a geezer. You may be amazed what comes your way. (Adobe Images)

Here I am sitting lazily in my favorite place on my front porch and drinking one of my many cups of geezer coffee. I am well fed, comfortably clothed, my wife tolerates most of my nonsense and I still get to sleep in the house. I suffer none of the physical maladies that seem to afflict so many old folks. I still possess most of my mental faculties (emphasis on most). How could life get much better? Then I get to thinking of some of my geezer friends and I am struck by the thought, “My God, did he really do that?” and the answer comes to me, “Yes, he really did, and almost nobody knows anything about it.”

Then I am reminded of the many, many geezers of today, who were once full of fire and life and who went places and did things. These old, wrinkled, stooped, hard-of-hearing men and women who, unless you drag it out of them, will never tell of their past glories and accomplishments. They were once real heroes and heroines who fought their battles, winning some, losing some, but always going forward.

How about the doctors and nurses who were in combat where death was a constant companion? They only did what they were expected to do.

How about the rural county sheriff who, alone, has to face down an armed, mean drunk or a knife-wielding lunatic holding a hostage? This wearer of the badge might have been scared to death and hours from help. He still did what he was elected to do.

How about the school teacher who takes on the incorrigible, criminal-to-be student and somehow motivates the punk to rejoin the human race. The kid who may go on to be a powerful spokesman for the underprivileged. That teacher did only what was expected of her.

How about the kid who was so withdrawn he could hardly speak and who stammered badly when he did speak? From somewhere within himself he found a fire and fury that helped him not only overcome his speech impediment, but to go on to be such a tremendous story teller that he became an internationally renowned motivational speaker?

Then, think of the Moms and Dads who spend 20 or 30 years of their lives depriving themselves, scrimping and trying to stretch their pennies but manage to raise their kids to be good, upright, contributing citizens?

Many of these very same folks who are now geezers, and are now mostly ignored, were the real, true heroes of years past. Those who paved the way for the following generations. Those geezers are a wealth of knowledge and wisdom. If you ask the old granny in the wheelchair, you might get lucky enough to have her tell you about the era in which she was a team leader in the Apollo program and how she was a vital member of the program to put the first man on the moon.

You might ask the old guy who spends his day in his rocking chair, watching the world go by, “What did you do in your youth?” If you are fortunate, he might tell you about the 40 years he spent as a mine rescue specialist. Yup, he was one of the guys who went into underground mines after cave-ins and explosions and led the rescuers in bringing out the wounded and the dead. He was also the guy who had to look into the faces of the waiting family members as he came out with the dead ones he could not help.

Would you like to be grandly entertained? Get acquainted with some of the old Las Vegas performers who retired here in Northwest Arizona. Those geezers can tell you tales about the life they lived and the characters they knew personally. They can tell you tales so funny, you’ll laugh until you are breathless. They can enthrall you with the stories of the old days when the mob ran Vegas.

Now, think about the guy ahead of you at the grocery checkout who stutters and fumbles and holds up the line, and just how impatient you get. Could he be the Marine medic who carried 14 critically injured warriors out of harm’s way to the aid station, saving their lives. His reward? While taking a ten minute break the same day, he was the victim of a hand grenade and spent three years in hospital and therapy before coming home.

This geezer and the others I mentioned are absolutely heroes of the first order. They may not say anything about it but they have been there and they have done that. They deserve our respect and our admiration. They deserve our tolerance and our patience. They may be old and the term “geezer” fits, but they are a treasure to be cherished by everyone who values what our society stands for.

When you see a geezer, make it a point to introduce yourself and strike up a conversation. You might find that you have just opened a treasure chest of enlightenment, laughter, and wonder. Don’t be surprised if you get a comment such as “Well damn, kid, I’m not dead yet. Have a cup of coffee and sit a spell. Let’s chat.”

I believe you’ll find yourself amazed at what comes to you.

A geezer's life ain't so shabby
Dear Abby: Nonagenarian is eager to share a long lifetime of experiences
How to be a geezer
The ninth life of my friend’s cat
A warrior's sunset