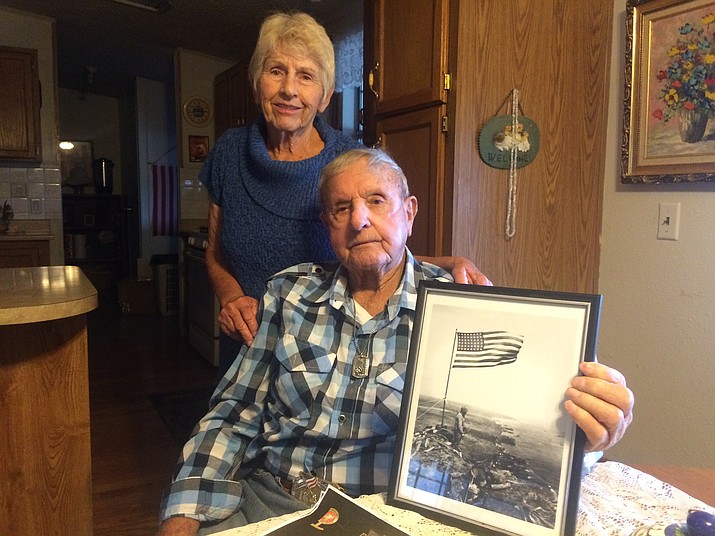 World War II veteran Al Eutsey shows a photograph of the American flag on Iwo Jima, with his wife, Sandra, at their Golden Valley home in November 2015. He died June 14 and a ceremony is set for July 23 at Southern Nevada Veterans Memorial Cemetery in Boulder City, Nevada. (Daily Miner file photo)

GOLDEN VALLEY – Abraham “Al” Eutsey, a decorated World War II veteran who survived the bloody battle of Iwo Jima, died June 14 at a hospital in Las Vegas after suffering a stroke and resulting complications. He was 93.

He lingered for about a month fighting to stay alive, even though he couldn’t eat or swallow, said his widow, Sandra.

“He was a strong guy and he had a mind of his own,” she said Monday in a telephone interview. “He just liked living and he was a fighter all his life.”

Eutsey was part of the U.S. Marine Corps 5th Division’s legendary Combat Team 28 that took Mount Suribachi in February 1945 and raised the first American flag on Iwo Jima. The iconic Marines flag-raising photo came a few days after the Japanese had recaptured their position and removed the first flag.

Of some 250 men in his unit, 67 were killed and 240 received the Purple Heart, including Eutsey. He was crawling up the hill when a mortar exploded next to him, sending shrapnel into the left side of his chest.

“I was on the first assault wave,” Eutsey told the Daily Miner during an interview at his Golden Valley home in November 2015. “There were heavy guns down at the beaches. I thought, ‘Dear God, help me through this and I’ll be a good boy for the rest of my life.’”

Eutsey was born Aug. 24, 1924, on a farm outside Pittsburgh, Pennsylvania, one of nine brothers and sisters. He joined the U.S. Navy at age 17, lying about his age, two weeks after the Japanese bombed Pearl Harbor.

He trained in San Diego and Alaska, and in 1944 his battalion was disbanded and formed into the U.S. Marines 5th Division.

Sandra Eutsey, who met her husband at a dance in Orange County, California, 37 years ago, said he was a wonderful gentleman who bought all the girls a soda and walked them to their cars.

For years, he honored his Marine buddies by going to reunions and memorials.

“I always treated him well because he did so much for our country,” Sandra said. “Anything he wanted to do, we did. Anywhere he wanted to go, I went with him.”

The couple have a blended family with two sons in California and a daughter who lives nearby in Golden Valley.

Butch Meriwether, retired Marine gunnery sergeant and neighbor of the Eutseys, said he always looked up to his shorter fellow Marine with respect and admiration. He arranged for Eutsey to take an Honor Flight to visit the World War II Memorial in Washington, D.C.

“Not once did I ever hear him brag about what he experienced in the Marines, and about his combat tour of duty on Iwo Jima during World War II. He was always proud to have worn the eagle, globe and anchor, and of the time he served God, country and the Corps,” Meriwether said.

A memorial service for Eutsey is scheduled for 10 a.m. July 23 at the Veteran’s Cemetery in Boulder City.