Coming together over US-Mexico border situation 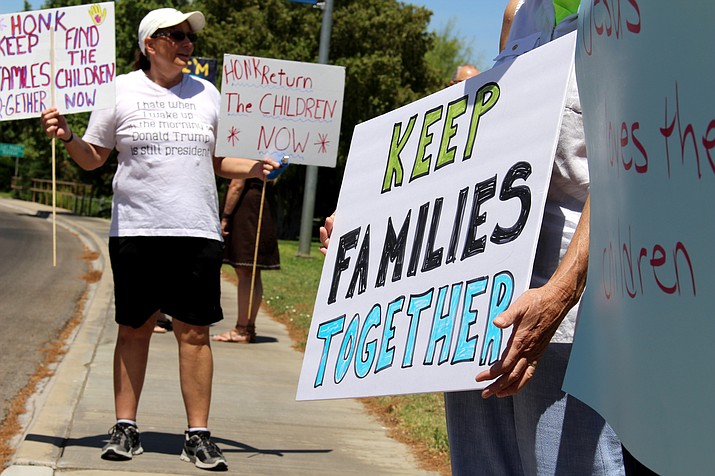 Supporters for Keeping Families Together at the U.S.-Mexico border held up their signs along Route 66 at Locomotive Park while cars passed by honking in support. (Photo by Vanessa Espinoza/Daily Miner)

KINGMAN – Mohave County residents gathered at the Trinity Episcopal Church Saturday morning to express their concerns about the situation going on the U.S.-Mexico border as children being away from their parents and put into shelters. Tears were shed and the passion behind the situation was heard.

“That your spirit may move every Kingman heart,” Fr. Phil Shaw said while opening up the gathering with a prayer. “Barriers that divide us crumble, suspicions disappear, and hatred cease.”

Sharon Weber, the event organizer started the conversation with key points from the Families Belong Together agenda. Such as reuniting families now and end family detention.

“Trumps attacks on immigrants before he was elected was to divide one group of people against another,” Weber said.

J’aime Morgaine, who is running for state senator, spoke about social justice and how people need to focus on the issue, which is the bill, and not the political party.

“We start with thoughts and prayers,” Morgaine said. “And we move forward with action.”

She stressed that people need to focus on the bills being introduced is the problem.

“It shouldn’t matter who is introducing it,” Morgaine said.

Stanfield Major and Susan Collins read poems to the attendees at the church.

Major’s poem brought acknowledgment to the suffering these families are going through.

Collins read the poem, “Refugees” by Brian Bilston. The poem has two different messages, one as its read forward and another as its read backward.

The floor was open to any attendees to speak what they have on their mind about the whole situation. Attendees shared how prior to a few weeks ago they felt proud to be American, but recently their views have changed a bit.

People who attended the event all met up at Locomotive Park with signs. Cars passing by that were in support of keeping families together honked their horns. Others that were against it shared their views with a thumbs down and other derogatory remarks.

This event was part of a nationwide movement happening in other parts of the country.