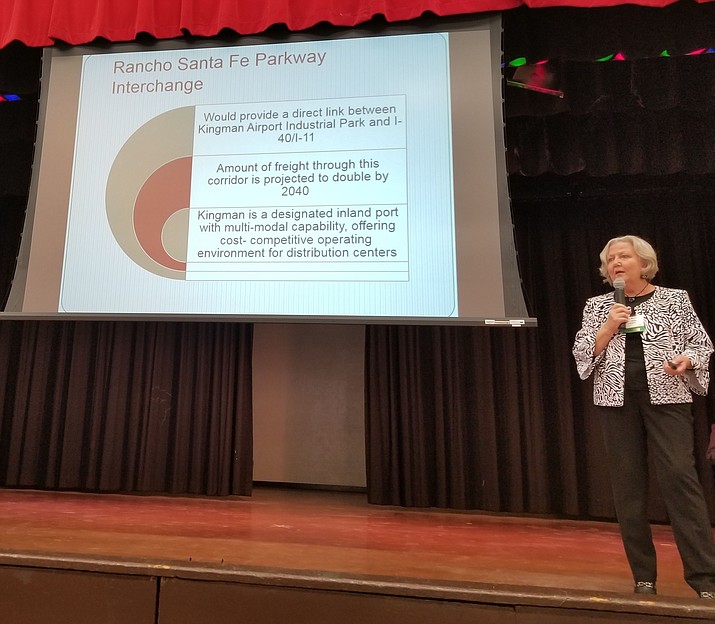 KINGMAN – Vice Mayor Jen Miles said her presentation on the I-11 East Kingman Connection Project was well liked by those in attendance at the Arizona Association for Economic Development Transportation Symposium held Feb. 28 in Wickenburg and sparked additional interest in the project.

“It was very well received,” Miles said. “People did come up and speak with me after the presentation and express their interest and enthusiasm for what we’re doing because they saw it as important for the state and saw the benefit of it.”

Miles has been invited by the public works association’s Arizona chapter to be a keynote speaker at their conference this summer, where she will go into more detail about Kingman’s goals and vision for the project. In addition, the City has been invited to place an article in a National Bank of Arizona magazine titled, “Elevate AZ!”

“I pointed out that the I-11 project is a collaborative initiative of the City of Kingman, Mohave County, ADOT and private-sector investors that is designed to take us out of the economic stagnation of the past 10 years and lead us into a period of economic vitality,” Miles said.

The project consists of building two interchanges to promote economic development, one at Rancho Santa Fe and another at Kingman Crossing. Miles explained to the symposium the differences between the two interchanges, noting the former will be a gateway to the Kingman Airport and Industrial Park and will open the door for industrial growth in addition to defining Kingman as a regional logistics hub. The latter will create opportunities for commercial and retail development while also providing medical and education access to residential residents.

“This project not only implements the Kingman general plan but it aligns with the state’s goals to support strategic infrastructure projects and to encourage economic growth in rural Arizona,” Miles said.

She also spoke of the economic and job growth that may result from the project at buildout, including an economic impact of $5.09 billion via commercial and industrial development, and tens-of-thousands of direct and indirect jobs. Both could develop over the course of some 20 years.

“The key for Kingman is to continue to make steady progress toward this project’s implementation, to continue to advance our partnership agreements with state and private sector partners,” Miles said, “and not to lose sight of the great benefit the project will afford us because it will lay the foundation for our region’s economic future and will contribute to the economic vitality of the state.”

She wanted to inform the citizens of Kingman that Dallas Hammit, ADOT deputy director of transportation and state engineer, talked about the Beale Street interchange with I-40 and U.S. 93 being an ADOT priority. Proposals from firms are now being sought and an expected completion date has been set for 2023 or 2024.

“I was very proud to represent Kingman and the City Council as to what our vision is and what we’re doing to make it a reality,” Miles said.