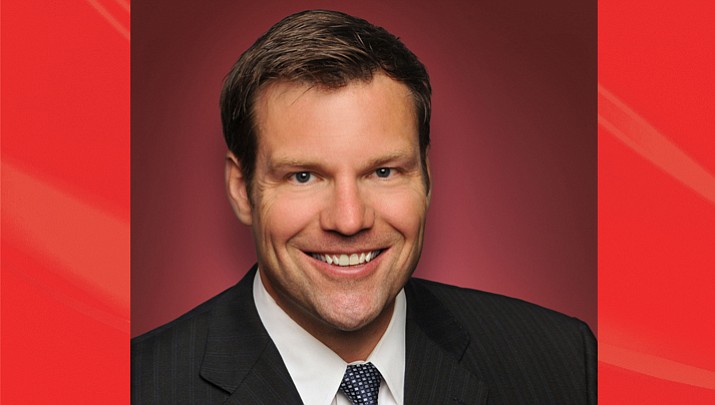 WICHITA, Kansas (AP) – A conservative Republican who has supported President Donald Trump's unsubstantiated claim that millions of illegal votes cost Trump the popular vote in 2016 will have to prove Kansas has a problem with voter fraud if he's to win a legal challenge to voter registration requirements he's championed.

The case headed to trial starting Tuesday has national implications for voting rights as Republicans pursue laws they say are aimed at preventing voter fraud but that critics contend disenfranchise minorities and college students who tend to vote Democratic and who may not have such documentation readily available. Kansas Secretary of State Kris Kobach, who is running for governor and was part of Trump's now-disbanded commission on voter fraud , has long championed such laws and is defending a Kansas requirement that people present documentary proof of citizenship – such as a birth certificate, naturalization papers or a passport – when they register to vote.

"Kansas is the site of the major showdown on this issue, and Kris Kobach has been such a prominent advocate for concerns about noncitizens voting and other fraudulent behavior. He essentially led the Trump commission on vote fraud and integrity and he has been a lightning rod — which makes him a hero to people on his side of the argument in trying to tighten up voting laws, but makes him kind of a mischief-maker and a distraction for people who are on the other side," said Barry Burden, director of the Elections Research Center at the University of Wisconsin-Madison.

Courts have temporarily blocked Kobach from fully enforcing the Kansas law, with the 10th U.S. Circuit Court of Appeals in Denver calling it "a mass denial of a fundamental constitutional right."

The trial before U.S District Judge Julie Robinson in Kansas City, Kansas, centers on the National Voter Registration Act, commonly known as the Motor Voter Law, which allows people to register to vote when applying for a driver's license. Robinson will decide whether Kobach has legal authority to demand such citizenship paperwork, and a key consideration will be whether Kansas has a significant problem with noncitizens registering to vote.

Dale Ho, director for the Voting Rights Project at the American Civil Liberties Union said the case is about what national standards the U.S. will have for voter registration.

"It is also a case about this false narrative of noncitizens participating in elections – which Kobach has said for years has been happening in large amounts – and now we are going to see his evidence," Ho said. "His evidence is going to be put on the stand in open court for a federal judge to rule on, and I think the public will finally get to see how little evidence he actually has."

No other state has been as aggressive as Kansas in imposing such proof-of-citizenship requirements. Alabama and Georgia have proof-of-citizenship laws that are not currently being enforced, according to the ACLU. Arizona is the only other state with a similar law in effect, but that law is far more lenient and allows people to satisfy it by writing their driver's license number on the voter registration form.