Column: Javelina numbers down, but we still had a great hunt 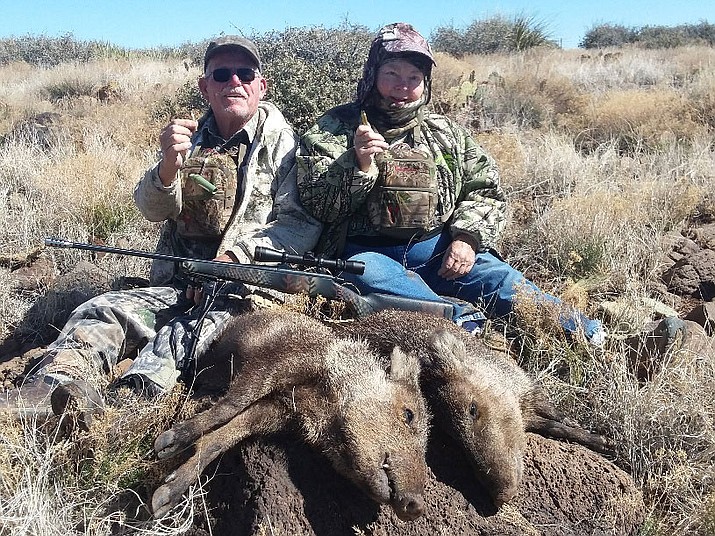 Photo special to the Miner

Outdoors writer Don Martin and Page McDonald show the javelinas they bagged on a recent hunt in Unit 18B. After making a long walk and slow stalk, the hunters were able to get within easy rifle range of the peccaries.

Every year, a group of us go on the general javelina hunt in Unit 18B, east of Wikieup. The number of hunters in our camp varies from year to year depending on who gets drawn and who has the time to hunt.

This year we had seven hunters in our camp, including a new hunter who was on his first big-game hunt.

In our camp were members of the Chan family. There was Jay, his brother Alan, and son Michael. Jay’s nephew Kyle, who lives in California, was there for his first javelina hunt. Kyle’s father Kevin was also in camp, but he didn’t have a tag.

My friends from St. George, Utah, Colby Adams and Scott Echols. also came down for the hunt. Scott was going to help Colby with the glassing duties as only Colby had a tag. Page McDonald and I both had general tags too.

Opening day was cloudy, windy and cold. Those conditions are not normally good for finding javelina. Despite the adverse conditions, the Chans located a group of javelina and Jay, Michael and Kyle all filled their tags. Colby and Scott, on the other hand, didn’t see any pigs.

Page and I couldn’t go out till the afternoon due to other commitments, but we got lucky when I spotted a pair of the desert dwellers in the bottom of a wash. The pair headed up the side of a steep mountain, as Page and I scrambled out of the truck and started to climb up an adjoining hill.

Unfortunately, Page got caught up in a catclaw bush, and though I could plainly see one of the pigs walking out in the open at just 100 yards away, I wanted her to take the first shot, so I waited. By the time Page was in position, the pigs were gone.

On Day 2, we were joined in camp by Jay’s youngest son, Ryan. Ryan – who I call the “The Javelina Whisperer” – said he would go out and glass some areas. We would be joined later in the day by Alan, who had been snowed in, in Flagstaff Friday.

While Jay, Page and I were driving to a location we were going to hunt, Jay got a text message from Ryan. He had already located a herd of pigs, but they were a long way off. We turned around and went to the area Ryan had last seen the herd. He had lost sight of them and I asked Page, who is 77-years old, if she wanted to hike and look for the pigs.

She agreed and we packed up and started off on what according to Jay Chan and his GPS would be a 1.47-mile hike, as the crow flies.

The hike was slow and treacherous. Boulder and rocks were all over the landscape. A slip and fall could be disastrous for Page or me. Slowly we moved up the mountain. I told Jay to go on ahead, as Page and I picked our way through the rocks. I spotted Jay at the top of the hill and could tell from his body language that he had found the pigs.

Page and I finally made it to where Jay was standing, and he pointed out the pigs were feeding at the top of the canyon. They were out of the wind, and it was sunny and warming up fast. They were about 150 yards away.

We moved in toward the herd. Javelinas have poor eyesight, but great senses of hearing and smell. We were down wind and not making any noise. Soon we were in close enough to get Page set up for a shot.

The entire process ended up taking 20 minutes as I switched Page from pig to pig, seeking to make sure she would be absolutely steady and was going to take a mature animal.

Page was using her Remington Model 7 Mountain Rifle in 260 Remington, and the rifle was topped with a Leupold compact 3x9 scope. It is a lightweight rifle-scope combination, but plenty good for the peccaries we were stalking. The rifle was equipped with a Harris 25S swivel bipod. For me, these shooting aids are essential when shooting in uneven terrain or long distances.

Finally, everything was in order and Page was on a large, adult sow. The sow was feeding just 40 yards away and had no idea we were there. Page settled in for the shot.

At the shot, the pig just fell over. I immediately made three sharp blasts from the Circe varmint call I was carrying and the rest of the herd froze as they tried to figure out what had just happened.

I got the rifle from Page and started looking for a target. Two boars were standing side by side, but one turned and started to run away.

“Better shoot soon,” Jay said as I settled the crosshairs on the second boar thatt was 74 yards away.

I squeezed the trigger and like Page’s pig, it just fell over and never moved. In a matter of seconds, both Page and I had bagged our javelina.

After tagging our pigs, and being so far from the truck, Jay and I decided to bone out the javelina. The hike out for Page and me took over two hours. We were exhausted by the time we got back to the truck.

Ryan and Alan drove up to where we were parked. Ryan, while waiting for us, had found yet another herd of pigs nearby and had picked up Alan at camp. They were going after that herd.

Colby and Scott joined us, and we learned that Colby had bagged a pig that morning. Now all we needed was to have Alan find that herd and hopefully fill his tag.

But it was not to be. Seems another group of hunters had located the herd and after making a stalk, took one out of it.

The next morning Jay, Alan, Ryan and I went to an area where we had seen pigs before. In no time it was Ryan who again found a herd. Jay would be the “Eye in the Sky” while Ryan and Alan moved in.

The wind and sun were perfect as Alan got set up on the herd boar at just 95 yards.

But when he fired the pig just stood there.

The herd actually moved toward Alan, and they stopped at 40 yards. He fired another shot, then three more, all of which weren’t even close to the pig he was aiming at. Unbeknownst to anyone, the scope on Alan’s rifle had somehow broke before he shot at the pigs. Due only to the failure of the scope, our seventh and last pig tag in camp wouldn’t get filled this year.

But it had been a great hunting experience with friends and family. And that is really what hunting is all about.