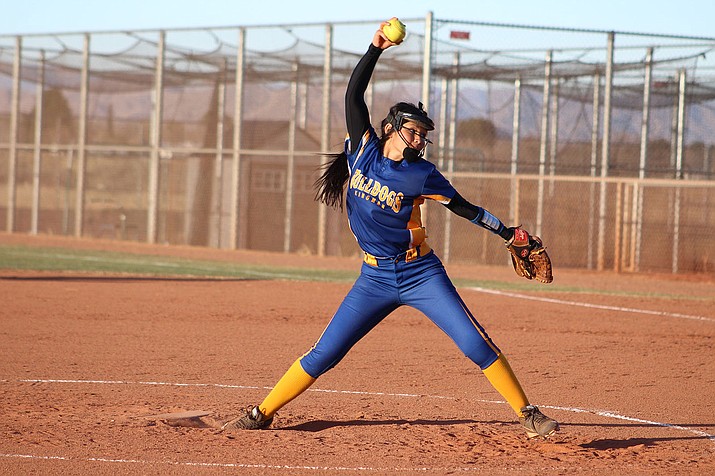 Kingman’s Lilianna Valdivia picked up the win over Odyssey Institute after yielding just one run on six hits with four strikeouts and no walks.

KINGMAN – It was a hit parade for the Kingman High School softball team Thursday as the Lady Bulldogs racked up 23 base knocks in a convincing 16-6 win over Odyssey Institute at KHS in six innings due to the run rule.

“We got off to a slow start – we are still working on being more consistent with our approach to every game,” said Kingman head coach Craig Lee. “I was a little disappointed with the lack of focus during our warm-ups, but I was proud of the girls for making some adjustments during the game and getting the win.”

A trio of Lady Bulldogs led the offense with four hits apiece. Payton Chamberlain went 4-for-5 with three RBIs, while Madi Bell was also 4-for-5 with an RBI and Kearra Tauta finished 4-for-5 with two doubles and an RBI.

Anastasia Tanner rounded out the top performers with a 2-for-4 day highlighted by a home run, a triple and three RBIs.

Lilianna Valdivia picked up the win in the circle – yielding one earned run on six hits with four strikeouts and no walks in six innings of work.

“Lilianna kept us in the game until the bats and defense came around,” Lee said. “When she is in the circle, she doesn’t act like a freshman – she is always composed. I preach mental toughness and that girl definitely has it.”

Kiley Holloway led the Lady Tigers with a 3-for-4 performance, highlighted by two RBIs and two doubles. Maryssa Edwards was 2-for-3 with two RBIS and two doubles, while Randa Short finished 2-for-4 with an RBI, a triple and a double.

Jillian Edwards added two RBIs and a double for the Academy to round out top performers.

Maryssa Edwards picked up the win in the circle after allowing just one earned run on two hits with three strikeouts and three walks in four innings of work.

Academy has a rematch with Lake Havasu (3-0) at 4 p.m. Wednesday on the road.

At Centennial Park, the Lee Williams High School softball team faced the Lady Panthers for the second time in three days, but the result wasn’t different in a 15-1 setback in five innings due to the run rule.

At Sedona, the Kingman Academy High School baseball team showed its firepower Thursday by racking up 16 hits in a 16-6 win over the Scorpions (2-3).

The Tigers fell behind 4-2 after the second frame, but they came roaring back in the fifth inning with six runs and added six more in the sixth to cruise to victory.

Donny Tatham led the way with a perfect 4-for-4 performance, while Kannon Butler was 2-for-5 with a team-high three RBIs and Kaden Bean also finished with two hits and one RBI.

Bridger Bodily finished with a hit, two RBIs and a double for Academy.

The Tigers (2-2) travel to Lake Havasu Wednesday for a doubleheader. First pitch in game one is set for 3 p.m.

At KHS, the Kingman High School girls tennis team couldn’t pick up its first win of the season Friday in an 8-1 setback to Sedona Red Rock (1-2).

The Lady Bulldogs picked up the lone win of the dual in No. 3 singles.

Kingman (0-4) traveled to Basis Flagstaff Saturday and then travel to Northland Prep Tuesday for a 3:30 p.m. dual match.

At KHS, the Kingman High School boys tennis team welcomed Sedona Red Rock to town Friday, but found itself on the wrong end of an 8-1 decision to the Scorpions (1-1).

The Bulldogs (0-4) faced Basis Flagstaff Saturday and then welcome Northland Prep (2-0) to town Tuesday for a 3:30 p.m. dual match.