A divisive road: Nation reacted to supervisor’s decision to rename road after Finicum 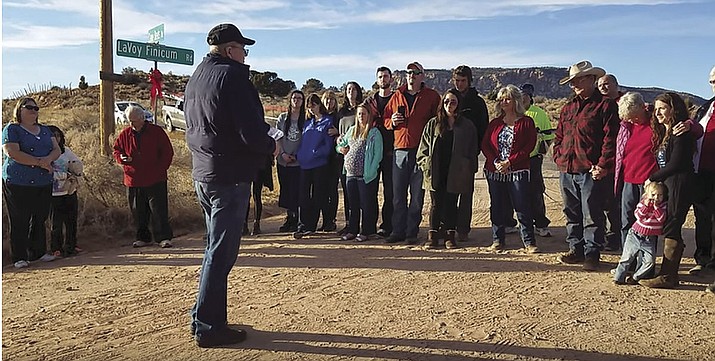 Family and friends of LaVoy Finicum participate in a January ribbon cutting after Mohave County Supervisors agreed to name the road after the slain militia leader who participated in 2016’s takeover of a national wildlife refuge in Oregon.

KINGMAN – In the days leading up to Mohave County Board of Supervisors voting to change a two-mile section of road near the Utah border to LaVoy Finicum Road, people from across the country weighed in on the decision.

Following a public record’s request by Today’s News-Herald, a common theme in letters submitted to the county offered insights to what was clearly an unpopular move.

“I hope you get more roads named like this because it means more lawbreakers are killed,” wrote Scottsdale resident Lou Kissling.

“Wow, not really sure where Mohave County is in our state, but I think … I will be sure to avoid this place, sounds a bit like a toothless, hillbilly western extension of those parts of Appalachia that are so ridiculed back East,” Kissling added.

The move that drew the ire of some as far away as Oregon and Kentucky was a 3-2 vote in November 2017 (supervisors Buster Johnson and Jean Bishop dissenting) to rename a section of Yellowstone Road in honor of Robert “LaVoy” Finicum.

Finicum was a member of Citizens for Constitutional Freedom, which seized and occupied the Malheur Wildlife Refuge in Oregon in early 2016.

The occupation that lasted more than one month triggered a standoff between state troopers and the Federal Bureau of Investigation.

Eight of Citizens for Constitutional Freedom including its leader Ammon Bundy were arrested on Jan. 26, 2016, while Finicum was shot and killed by law enforcement officers that same day.

Kissling took exception to Supervisor Hildy Angius comments at the time that she was moved by a group of people who stood up for what they believe in.

“So that means you support the killing of Neo-Nazis and white supremacists and anti-LGBT folk and child molesters and IRS cheats who break the law because they stood up for what they believe in,” Kissling wrote.

At the time Angius offered up her response.

“I happened to be a Jew from New York, so thank you for your typical, and highly predictable, Nazi comparison. How original,” Angius wrote. “But, thank you for writing. Isn’t it nice we live in a country where you can say these things? That’s the country LaVoy Finicum was trying to protect.”

Angius stands by her remarks.

“This is what I wrote and this is what I meant,” Angius said. “The media made up the narrative against this group and they lied. They were used as an argument of a pro-government, anti-militia news story. A name change came upon a street where the Finicum’s family lives; they paid all the fees and did what they needed to do, so I didn’t see any reason not to change the name.”

Prior to the name change, several people supported the name change including Kingman resident Jennifer Jones-Esposito who called Finicum an American patriot” who was “murdered in cold blood” at the hands of authorities.

“Renaming a road to honor a person who illegally occupied, and was an accomplice in the destruction of, government property in Harney County, Oregon … encouraged the intimidation of civilians and federal workers … and who was shot during the act of reaching for a concealed firearm while from law enforcement offices … (is) a shameful action (and) a slap in the face to law enforcement officers and to the rule of law.”

The Oregon state troopers who shot and killed Finicum were later cleared of wrongdoing, but whether the shooting was justified is still a matter of debate.

In her dissent, Bishop said she believed in the rule of law.

“Finicum kind of threw our laws back in our face,” Bishop said. “The proper venue for this was in the court system. I don’t recognize him as a hero, but as a well-respected member of his community.”