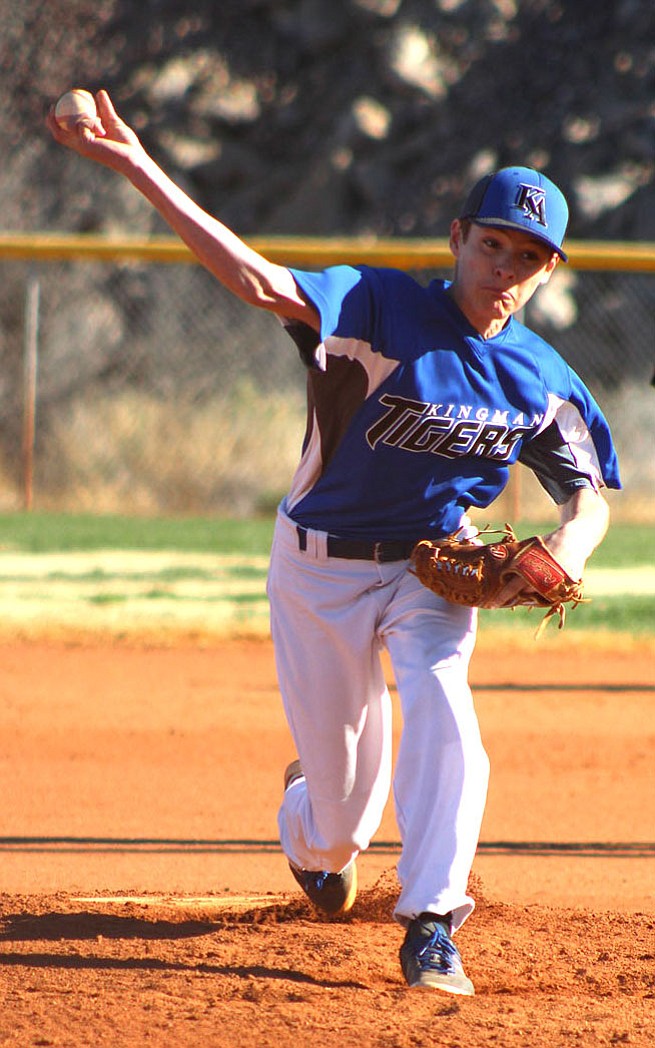 Kingman Academy’s Wyatt Hall picked up the win against Antelope after allowing one earned run in five innings of work.

KINGMAN – Wyatt Hall entered the game in the top of the third inning with the Kingman Academy baseball team facing a four-run deficit against Antelope. The sophomore pitcher kept the Tigers within striking distance and then his teammates came through with two runs in the sixth inning for a 6-5 victory Monday at Southside Park. 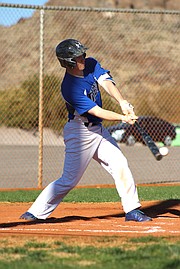 “Coach really just told me to get in there and throw some off speed because they were really matching up well against the fastball,” Hall said. “It’s good to come in and make a statement in the region.”

Hall picked up the win in the Academy’s 2A West Region opener, yielding one earned run on four hits with two strikeouts and two walks in five innings of work. Tigers head coach Bill McCord decided to bring in Hall because the Rams were jumping on starter Donny Tatham’s fastballs.

The pitching change paid off and McCord knew it was the right move.

“Wyatt is a big change of speed and we knew that,” McCord said. “He has a dirty little curveball and knuckleball. He likes to throw it and we told him to throw it. It put them on their heels.”

Academy found a way to shut down Antelope, but it struggled to make adjustments at the plate – finishing with just six hits in the game. The Tigers found a way to score enough runs for the win though.

Brad Ogden, Ryan Hurley and Kannon Butler each drove in a run for Academy, while the Tigers scored their final two runs on Antelope (5-5, 2-2 2A West) miscues.

Pinch-runner Bridger Bodily scored the game-tying run after a pickle ensued between third and home. It appeared the Rams had the third out of the inning, but an overthrow to third allowed Bodily to score.

“The third-base coach was telling him to get off while the pitcher was in the wind-up, then stop and be aggressive and then come back,” McCord said. “But he kept thinking get more and then he took too much.”

Academy’s Peter High scored the game-winning run on a wild pitch. The Tigers had an opportunity to add an insurance run with the bases loaded, but Kaden Bean grounded out to end the frame.

“They gave us the two runs that we needed,” McCord said. “We were pretty fortunate on that. I was happy to get out of it with a W.”

McCord is obviously happy with the victory, but he wants Academy (4-4, 1-0 2A West Region) to work on its offense as it prepares for a doubleheader Saturday at Trivium Prep (1-3, 0-0). First pitch of Game 1 is set for 2 p.m.

“We have to make adjustments,” McCord said. “We’ve been preaching to them all year about the adjustments they need to make. They’re not understanding that, so we’re going to help them understand all week. We’re going to do a lot of live hitting with a lot of different pitches.”