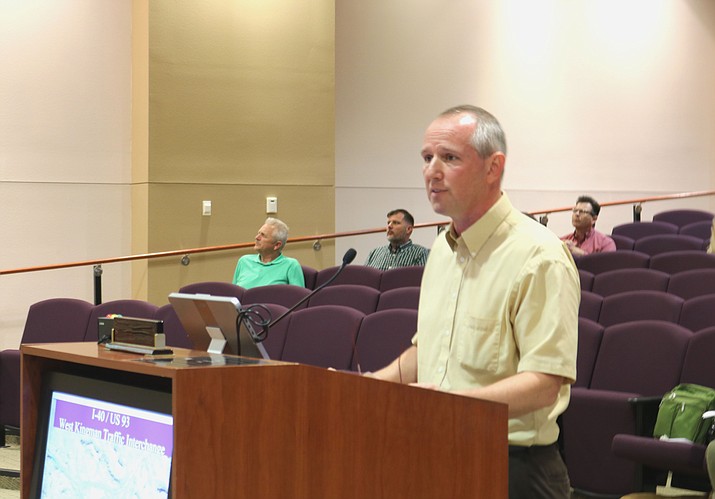 According to Greg Henry, city engineer, the Interstate 40 and U.S. 93 connection was first brought to the table after operational concerns were brought forth by ADOT in 1993. Profile studies, feasibility reports and project scoping have been in the works since 1999. Project scoping, alternative analysis, environmental studies and design concepts were started by ADOT in 2011, and have just this year been completed.

“I-40 U.S. 93 west Kingman TI (traffic interchange) is an ADOT project,” Henry said. “They currently have money ($5 million) in their current five-year plan to fund this design … They’re proposing to place $55 million in the construction budget in fiscal year 2024 for the project.”

Henry said the Kingman Crossing project has been discussed since 2006, when design concept and Federal Highways Administration reports were completed by engineering and design company URS. AECOM Technical Services later acquired URS in 2014. The design-concept report for the interchange was completed in 2010, and AECOM submitted a final feasibility study in 2016. Council contracted AECOM to design the interchange in 2017, for which the plans are 90 percent complete.

“After 2012 they (ADOT) showed nothing,” Henry said in explaining the absence of the project in ADOT’s five-year plans.

The City is looking to bring on Matrix Design Group as the I-11 East Kingman Connection Project manager. The connection project includes both Kingman Crossing and Rancho Santa Fe interchanges. Kingman would work with Matrix, along with AECOM and Tierra Right-of-Way and Infrastructure Mavens, to determine the project’s scope of work, the delivery system and the manner in which it will be funded.

The scope refers to what Council would like built in regards to arterial roadways for the interchanges. Delivery system refers to the way in which the interchanges will be built: Design-bid-build, construction manager at risk or design-build. The total fee for work done by the project manager and team is estimated at about $1,190,000. Interim City Manager Jim Bacon said a contract with Matrix could be on the April 3 agenda.

Representatives from Stifel Public Finance presented to Council different routes the City could take in financing the interchanges. Those include using Kingman’s excise tax revenue, revenue generated from the one-half percent sales tax increase that is meant for capital projects, and additional sources of funding or bonds yet to be determined.

Tina Moline, city finance director, said when looking at projects such as the interchanges, a funding source must be identified.

“Which you (Council) did back in August of last year,” Moline said. “You approved a 1 percent increase in the city’s TPT rate, and half of that one percent was dedicated to capital projects. The capital project that has been identified is the I-11 East Kingman Connection Project.”

Moline noted the one-half percent TPT increase is expected to generate some $3.1 million within the first year of collections.