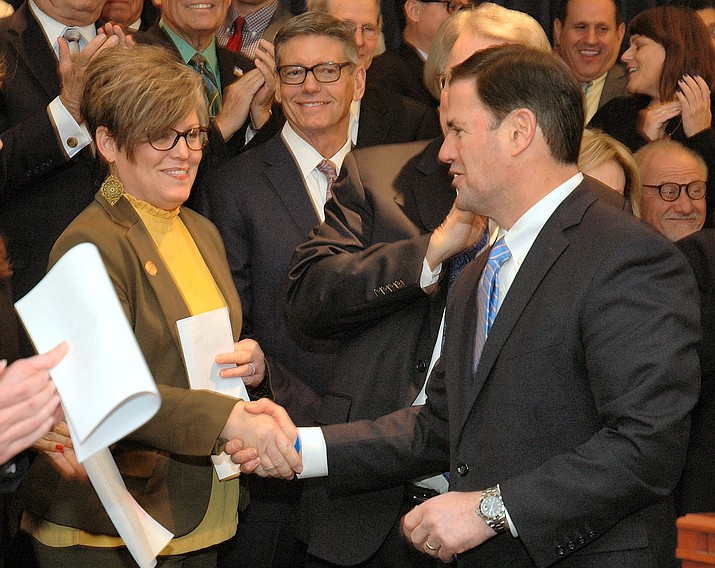 PHOENIX (AP) – The Arizona Legislature on Thursday overwhelmingly passed legislation extending a sales tax that provides more than $500 million a year for K-12 education, an unexpected move that averts a looming "fiscal cliff" that threatened more than 10 percent of the state's school funding.

The legislation averts the need for a public vote expected in 2020 to avoid an expiration of the tax in mid-2021. Republican Gov. Doug Ducey plans to sign the bill, spokesman Daniel Scarpinato said.

Just 10 of 90 lawmakers, all majority Republicans, opposed the extension. That left a bipartisan group of Republicans and Democrats cheering the approval, although both sides acknowledged that the state's woefully underfunded schools need more money, not just current funding levels.

"I've heard this called a Band-Aid," said Republican Rep. Doug Coleman, the bill's original sponsor. "This is $13 billion over the next 20 years that would have gone away. I agree much more needs to be done."

"This is doing nothing to solve a crisis," said Democratic Sen. Katie Hobbs. "It's simply continuing the status quo, and we still have to do a lot to make sure our schools are still adequately funded.

The measure required a 2/3 vote because it essentially raises taxes by keeping in place a tax that was set to expire. Republican lawmakers haven't voted for a tax increase in recent memory.

Rep. Michelle Ugenti-Rita said she voted no simply because it was a "tax increase."

GOP Rep. Travis Grantham said he opposed the measure because extending it without changes just continues restrictions on how the cash is spent.

"We're not addressing what I believe to be one of the main issues of the bill – which is hey, there's these buckets in the bill that money is dropped into them and the schools have to spend the money as the bill's written," he said. He said the money should be put into the state's education budget so the boards and the districts can spend it accordingly.

Theirs was a clear minority, however, as the proposals by Coleman and Republican Sen. Kate Brophy McGee were widely praised, even by fiscally-conservative Republicans.