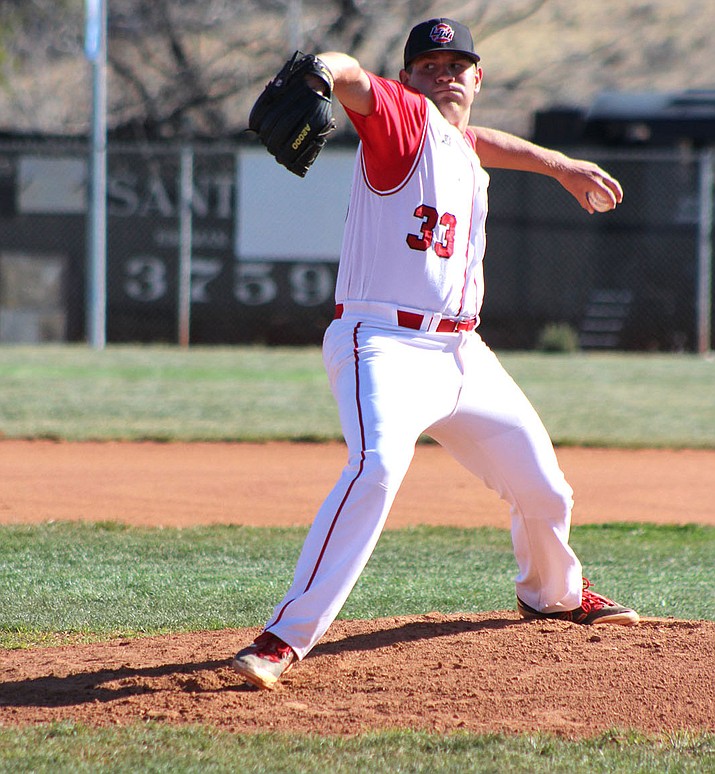 The junior crushed a home run in the first inning and the Vols played a solid game defensively to pick up a 2-1 win at Dick Grounds Field.

“He threw me that high fastball,” Bathauer said of Eagles pitcher Carter Kasprzyk. “I’ve been working on that, even though my coach doesn’t like it. It just happened to go out.”

Lee Williams head coach Patrick O’Boyle didn’t have any problem with Bathauer swinging as he said it wasn’t that high of a fastball.

Nevertheless, it gave the No. 15-ranked Vols the momentum they needed to deal 10th-ranked Flagstaff (5-1, 4-1) its first 4A Grand Canyon Region loss.

“Mike took a good swing at it and put the ball over the fence,” O’Boyle said. “I’m never going to be mad at that. We preach approach – that’s what he likes to hit and he went after it. I’m happy with that.”

While Mike Bathauer provided the early fireworks, it was his brother Matt Bathauer who threw a gem on the mound.

The junior allowed no earned runs on three hits with eight strikeouts and three walks in six innings of work.

“Matt Bathauer pitched a really great game and our defense played really well behind him. We got the timely hits when we needed to. I’d like to see us cash in on a few more of those opportunities, but we’re definitely going to just improve.”

The Vols might have won in more convincing fashion if not for a few controversial calls.

The first came with the bases loaded in the fifth when Addis Guzman hit a ball at his foot that should have been called foul, but was called fair.

Then in the sixth, a liner down the first-base line was called foul despite looking fair. Those two calls didn’t hurt Lee Williams though as Mike Bathauer pitched a perfect 7th inning for the save.

“We battled – there were some things that went wrong, but the kids did a great job of sticking together,” O’Boyle said. “They kept buying into what we do. They didn’t panic and we came out with the win. We’re very fortunate there. Flagstaff is a very good team and they’re very well coached.”

The Vols finished with four hits as a team, with Mike Bathauer, Paul Giglio, Carter Rhoades and Chad Moore each tallying one. The Bathauer brothers meanwhile accounted for Lee Williams’ lone RBIs.

“We had a lot of great at-bats,” Mike Bathauer said. “We had a lot of hard-hit balls. All of us have been working on it and I have to give credit to my friend Chad (Moore). He’s been really working hard and it showed this game. We put it together just enough to get past a really good team.”

“That is a great team right there,” Matt Bathauer said of Flagstaff. “To have that win, that really gets our confidence up. I was really happy that all our guys bought in today and we fought.”