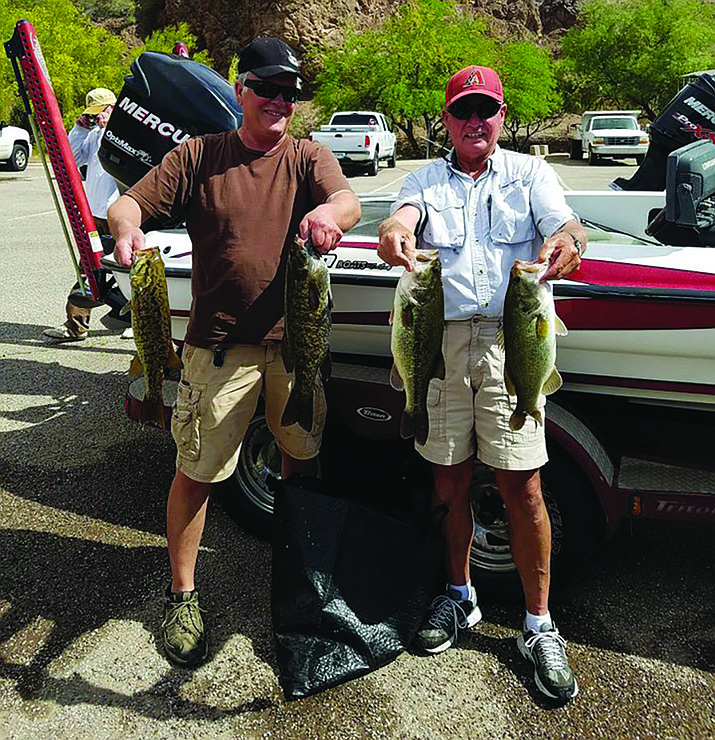 Co-winners Eric Wolsey, left, and Greg Parker show some of the bass that helped in the Kingman Bass Club tournament on the Parker Strip.

PARKER – In the many years that the Kingman Bass Club has been in existence, there has never been a tie for top-team in one of its tournaments, until now.

The KBC held a one-day tournament on the Parker Strip on the Colorado River and when it was over two teams were declared the winners.

The club fished on the Parker Strip, which is an area in the Colorado River below Parker Dam to about 10 miles south of Bluewater Casino.

When it was over, each of the nine teams brought in limits of bass. Both largemouth and smallmouth bass were caught by the anglers.

At the scales, Greg Parker and Eric Wolsey checked in a five-bass limit that weighed 16 pounds, 13 ounces.

Club rules dictate in the event of a tie, the team with the largest big fish is the winner.

In this case, both teams had a big fish that weighed 3.64 pounds, so both teams were declared co-winners.

In third place was the team of Donnie Davis and Matthew Rust. They had a five fish limit that weighed 15.67 pounds, but they had the tournament big fish that weighed 3.89 pounds.

Donnie Scroggins, president of KBC, said that anglers used a variety of baits to catch both smallmouth and largemouth bass during the tournament.

“My dad Ray and I used jigs to catch our limit, but others used swim baits and drop shot to catch their bass.”

The next KBC tournament will be a two-day tournament on Lake Powell on May 26-27. The pre-fish meeting will be at Kingman Honda, 3800 Stockton Hill Road, May 16. All anglers who like to fish for bass are invited to fish with the KBC.