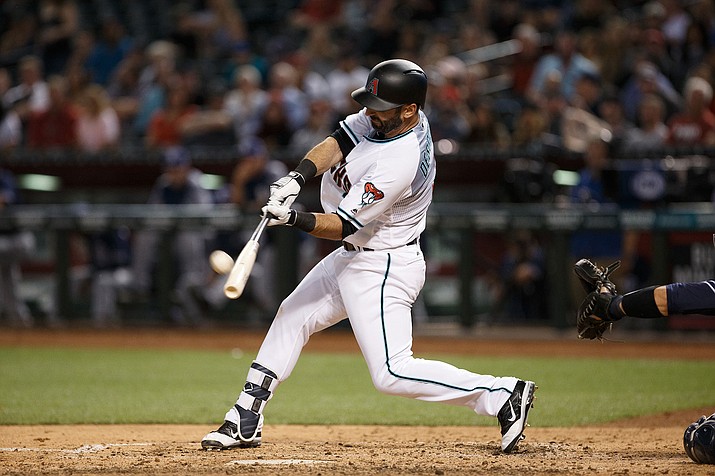 Arizona's Daniel Descalso hit a two-run, go-ahead triple in the seventh inning to give the D-backs a win over the Dodgers.

PHOENIX (AP) – Not even Clayton Kershaw can pull the Los Angeles Dodgers out of their funk. Not with the way the Arizona Diamondbacks are playing.

Daniel Descalso, whose earlier error had led to an unearned run, had a two-run, go-ahead triple in the seventh inning and the Diamondbacks rallied to beat Los Angeles 4-3 on Tuesday night, handing the Dodgers their fourth straight loss and seventh in eight games.

The Diamondbacks won for the fifth time in six games, improving to 21-8, tied with Boston for best record in baseball and Arizona's best start through 29 games in the franchise's history.

"It just worked out," Arizona manager Torey Lovullo said. "It was one of those special days where everybody had a little bit of a piece in it."

The reigning NL champion Dodgers trail the first-place Diamondbacks by nine games in the NL West.

"It is frustrating for all of us," Los Angeles manager Dave Roberts said. "When Clayton takes the mound we expect to win. Looking at the seven starts that maybe he has made, to lose five of those games is something that I can't explain."

Arizona is 2-1 in games Kershaw has started.

"I say this with a lot of respect," Lovullo said. "To get to where you're wanting to go, you've got to beat pitchers like this. The fact that we're stacking up against him and doing OK means we're on the right track."

Kershaw left the game after six innings with a 3-2 lead.

"You face Kershaw, you know you're going to get his best every time. He's a great competitor," Descalso said. "We got two solo homers and he left with the lead. ... I was able to come through with a big hit and the bullpen did what it's done all year and that's not allow any runs or hits, or nothing really."

A.J. Pollock homered for the fourth time in six at-bats – after his three-homer performance the previous night – and Christian Walker hit a towering pinch-hit solo shot measured by Statcast at 479 feet. They were the only runs allowed by Kershaw, who gave up six hits, fanned six and walked one and remained 1-4.

Cody Bellinger hit a two-run homer for the Dodgers, who have lost seven of eight to Arizona this season.

Lefty Adam Libertore (1-1) relieved Kershaw and gave up singles to Deven Marrero and John Ryan Murphy to bring up Descalso, who lashed a triple into the right-field corner to bring home both runners and make it 4-3.

The Dodgers had gone up 3-1 with an unearned run when Descalso dropped Chase Utley's fly ball in left. Utley took second on the play, advanced to third on a ground out and scored when second baseman Ketel Marte made a diving stop of Matt Muncy's grounder.

Walker's monster home run made it a one-run game.

The Diamondbacks have opened the season with nine straight series victories, the first NL team to do so since the 1907 Chicago Cubs. They can make it 10 in a row with a victory either Wednesday or Thursday in the four-game set.

Dodgers: Manager Dave Roberts said 3B Justin Turner (left wrist fracture) will not go on a rehab assignment this week, as had been previously suggested, but probably will go out next week. ... 2B Logan Forsythe (right shoulder inflammation) will leave for a rehab assignment this weekend. ... Roberts said he expects RHP Rich Hill (finger infection) to come off the DL to start Sunday against San Diego in Monterrey, Mexico.

Diamondbacks: LF David Peralta was out of the lineup after getting hit in the right hand by a pitch on Monday night but grounded out as a pinch hitter in the eighth.

The Arizona Diamondbacks completed the three-team trade that brought them OF Steven Souza Jr. by sending RHP Sam McWilliams and LHP Colin Poche to Tampa Bay as the two players to be named in the deal when it was initially announced. McWilliams, 22, was 1-1 with a 2.10 ERA for Class A Visalia. Poche, 24, has thrown 11 scoreless innings with 23 strikeouts and two walks for Double-A Jackson this season.

Los Angeles recalled left-handed reliever Edward Paredes and optioned right-hander Brock Stewart to Triple-A Oklahoma City. Paredes was 1-2 with a 1.86 ERA and 10 strikeouts in nine appearances with Oklahoma City and will be used as a left-handed specialist with the big league club, Roberts said.