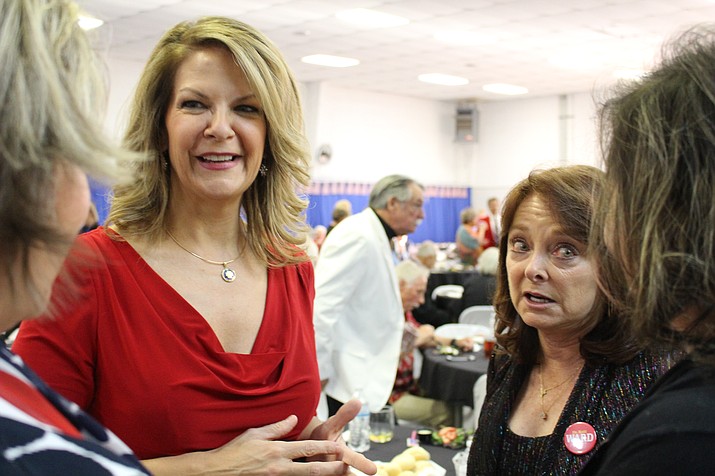 She was also in attendance for the 2018 Patriots Dinner Saturday in Kingman at the Mohave County Fairgrounds, alongside Gov. Doug Ducey.

Ward spoke with the Daily Miner about what she is going to do about healthcare if she wins and arrives in Washington, D.C. and how Americans deserves high quality and cost effective care.

“I think that ObamaCare is a bad idea since the beginning,” she said.

Ward mentioned implementing health savings accounts and catastrophic care packages that require benefits for cancer, pregnancy, car accidents, and long-term areas. She also believes that there is nothing wrong in our healthcare system that can’t be fixed in Washington D.C.

She discussed the current education crisis going on in the state. Ward is in support of great teachers having great pay, but is disappointed by the strike.

“Teachers signed a contract saying that they will work a certain number of days,” Ward said. “Kids need to go to school.”

Ward also said that people out of state came in to “agitate” the situation and needed to go back home.

Ward is also in full support of President Donald Trump and his views such as the border wall, illegal immigration, getting rid of ObamaCare, having a strong military and supporting our veterans.

On border security she believes national security starts with border security and supports the RAISE Act, which Trump championed to create a merit based immigration system that protects the American worker.

Trump tweeted his support for Ward back in August 2017, before sitting Sen. Jeff Flake announced he would be seeking re-election, saying, “Great to see that Dr. Kelli Ward is running against Flake Jeff Flake, who is WEAK on borders, crime and a non-factor in Senate. He’s toxic!”