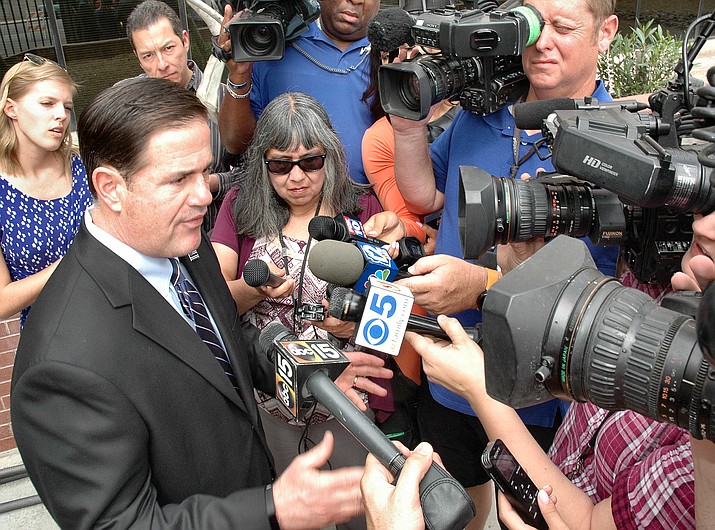 Gov. Doug Ducey answers questions Monday about the pay raise for teachers in the budget and whether it really is a 20 percent increase.

PHOENIX – Gov. Doug Ducey took a swat Monday at an initiative designed to raise taxes on the wealthy to finance education.

In speaking with reporters, the governor said he wants to know more about the ballot measure being pushed by teachers and education advocates to place a surcharge on the income taxes of individuals earning $250,000 a year or more or couples filing jointly with $500,000 in taxable income. There’s an even bigger surcharge for those above the $500,000/$1 million income figure.

But conceptually, Ducey made his views clear.

“Well, I don’t support tax increases,’’ Ducey said. “I think the government should find a way to live within its means.’’

Backers say the dedicated revenues and the estimated $690 million the levy could raise will guarantee there is enough to fund education, including promised teacher pay raises, should the governor’s economic growth projections not pan out.

Ducey, however, defended those projections, saying he is confident there will be enough new revenues to put an additional $1 billion into education during the next three to five years. That includes not just the approximately $650 million price tag for the teacher raises by the 2020-2021 school year, but the state finally restoring by the 2022-2023 school year the $371 million a year it has failed to give school districts annually for things like books, computers, buses and minor repairs.

The most recent figures from the Arizona Department of Revenue suggest that the levy would hit only those whose wages and investment income put them in the top 2.5 percent of Arizonans.

Ducey, who made his fortune from selling Cold Stone Creamery in 2007, sidestepped a question of whether he would be personally affected from such an income tax surcharge.

“Certainly, not with the governor’s salary I wouldn’t,’’ he quipped, noting his $95,000-a-year stipend for being the state’s chief executive.

Pushed about other sources of revenue, Ducey said to check out the financial disclosure statement that must be filed by all public officials.

Only thing is, that form lists only other source of income, but not amounts. It does detail various investments, though the form has only three value categories – under $25,000, $25,000 to $100,000, and more than than $100,000 – with Ducey detailing several in that top bracket including his Paradise Valley home, a half an acre in Flagstaff, several individual retirement accounts and a blind trust.

Backers need 150,642 valid signatures on petitions by July 5 to qualify for the November ballot.

Ducey also said Monday that teachers were not lied to when he promised last month each would get a 20 percent raise.

In unveiling his proposal, the governor said it would provide an “across the board’’ increase to teachers of 9 percent this coming school year, with an additional 5 percent the following year and an identical amount the year after that.

“We are going to put 20 percent additional money in for teacher pay, up through 2020,’’ he reaffirmed on Monday.

But the legislation approved last week takes the more than $300 million for that first year and the additional amounts in future years and instead gives those dollars to individual school districts based on the number of teachers each has.

At the very least, that means that the dollars going to districts whose teachers are paid more than the statewide average won’t be enough to cover that full 19 percent. Ducey uses the 20 percent figure, counting a 1 percent pay hike lawmakers approved last year which already is in effect.

Conversely, districts with low average pay will get proportionately more, meaning there would be enough for their districts to award pay hikes north of that average.

And it’s even more complex than that.

“The way the state will measure this is the average teacher pay today is $48,372,’’ he explained Monday. Ducey said there will be additional dollars given to schools sufficient to bring that average up to $58,130 by the 2020-2021 school year.