Coffee with a candidate for governor 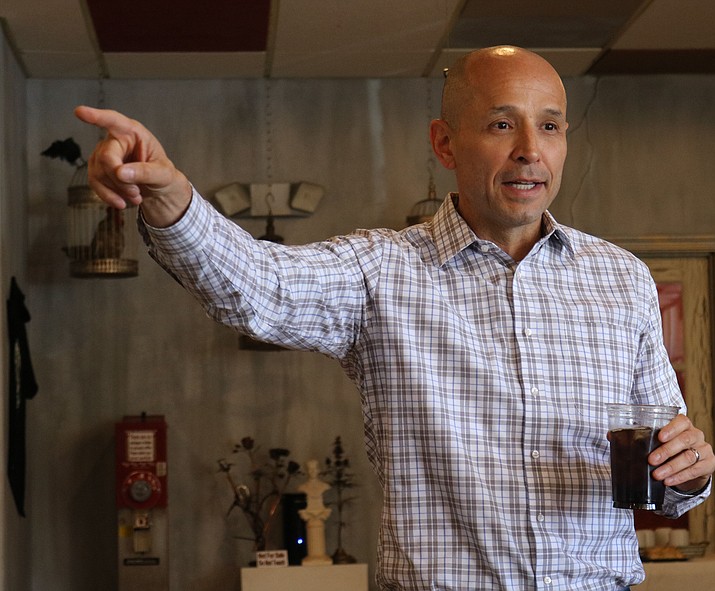 KINGMAN – Coffee and muffins weren’t the only treats patrons of Beale Street Brews indulged in Wednesday morning, as David Garcia, Democratic gubernatorial candidate, was on hand to speak with citizens in a laid-back and conversational setting.

“If you gather people, we’ll come out,” Garcia told those in attendance. “And not just to tell you what happened in Phoenix and to inform you, but to get out here early enough for you to be part of the conversation. And that is a commitment that I’m going to make as governor."

Garcia told those citizens at Beale Street Brews that he’s ready to listen to what they have to say. If elected governor, he said his focus will be on education, healthcare and the environment, with an emphasis on water issues in Arizona.

Laurence Parry, Kingman resident, took Garcia up on his offer to listen to people from rural Arizona in asking the candidate how he would put Kingman “on the map.”

Garcia said putting Kingman and other rural cities on the map requires discussions about opportunities and challenges facing those areas, but that the conversations can’t stop there.

Another issue Garcia addressed at the meet and greet was the water issues facing Arizona. J’Aime Morgaine referenced the U.S. Department of Agriculture’s designation of Mohave County as a natural disaster zone due to the current drought. She said there is agriculture taking place on a level that is “sucking the aquifers dry.”

Garcia said Arizona’s water problem keeps him up at night and that an answer has to be found. He said that can only be accomplished if everyone works together. He plans to talk with those at the state level about how to use water wisely and conserve it.

Garcia’s stopped in Bullhead City and Lake Havasu City as well Wednesday. He said he hopes he sees the same energy there as he did in Kingman.

“It was a great turnout with a lot of energetic input,” he said. “I want to encourage people to continue that.”