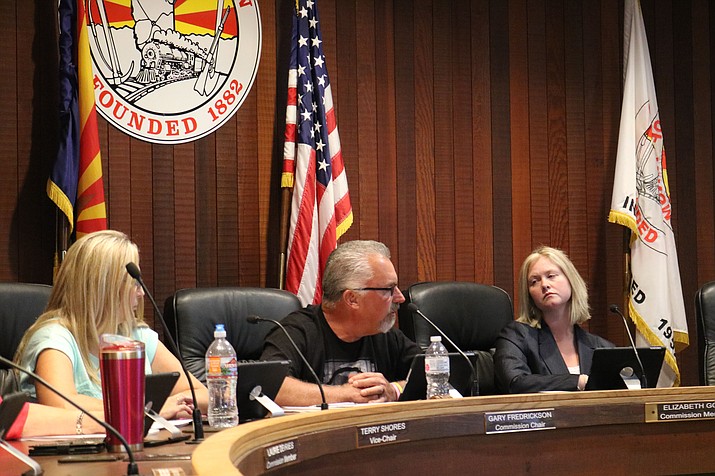 Cargo containers can be used for storage only in commercial zoning districts, but the Planning and Zoning Commission is looking into permitting them in larger residential districts.

KINGMAN – Residents are increasingly turning to cargo containers for storage needs in residentially zoned areas because of their affordability and security, but since those containers are not permitted in those districts, the City is seeing an increase in zoning violations.

The Planning and Zoning Commission began discussing how the City should address the increasing number of cargo containers being used for storage in residentially zoned districts at its meeting Tuesday.

Commissioner Charmayne Keith was not excited at first about allowing cargo containers in residential districts.

“My opinion as a realtor is it does affect the neighboring properties,” she said.

Commissioner Elizabeth Goss said she would not appreciate a cargo container on a neighboring property, and that other cities she’s lived in would not permit them in residential zones.

“As someone who is relatively new to Kingman and has spent most of her time in New York and Chicago and places like that, it is not unrealistic to not allow storage containers,” she said. “Most places that are at all nice would never allow a storage container to be there.”

Almost all of the commissioners recognized that neighbors of those using cargo containers may not appreciate the lack of aesthetic appeal. Commissioner Terry Hunsicker said people have expectations about what their neighborhoods will look like upon moving here. He said that expectation may not include next-door cargo containers.

However, he added that regulating them is difficult.

“I don’t want to block people from having an opportunity and choice to be able to treat their property and have services and things they’d like to have on it,” he said. “But at the same time, I want to be respectful to other people around there that maybe that’s something they don’t want in that particular area.”

“The easiest solution on this would be if it’s agricultural, or rural residential or (with) horse privileges, there would be an expectation that you would see one of these containers,” McCoy said. “And they should be allowed, they shouldn’t be banned. Allow them in that type of zoning, and ban them in others.”

The commission was willing to look further into that notion. It asked staff to bring back more information on cargo container allowances for the larger residentially zoned districts of rural residential, R-1-20, R-1-40, R-MH-20 and R-MH-40.

Shaffer said she will also bring more information on required lot sizes for cargo containers. In addition, she asked residents to attend next month’s meeting and give their input.

“We really do like people to come so that we can hear what they want,” she said.