Even from afar, McCain raises his voice against torture 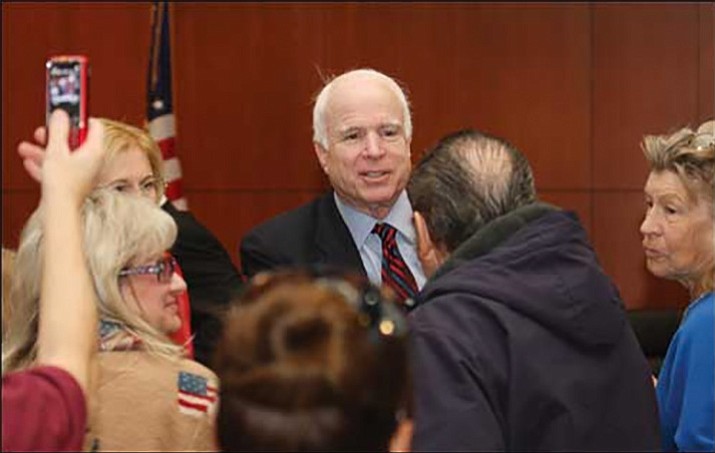 In this 2009 file photo Arizona Sen. John McCain shakes hands with local residents at the Mohave County Administration Building. The Republican Senator served as a Navy pilot during the Vietnam War. He was tortured in captivity. (Miner 2009 File Photo)

WASHINGTON (AP) — As the Senate began considering Gina Haspel's nomination to head the CIA, one voice was noticeably missing.

Republican Sen. John McCain remained at home in Arizona battling brain cancer as Wednesday's debate turned to the past use of enhanced interrogation techniques, now banned, that President Donald Trump has suggested perhaps should return.

Haspel, the CIA's acting director and a career intelligence officer, faced grilling about her role overseeing some CIA operations in the aftermath of the Sept. 11, 2001, attacks. Some senators asked about her morals. Haspel told them she doesn't believe torture works.

The absence of McCain, a Navy pilot who was tortured in captivity during the Vietnam War, hung over the conversation. What he would have to say about Haspel mattered. But not until Washington had all but finished for the evening did he finally weigh in.

"I believe Gina Haspel is a patriot who loves our country and has devoted her professional life to its service and defense," he said in a statement. "However, Ms. Haspel's role in overseeing the use of torture by Americans is disturbing. Her refusal to acknowledge torture's immorality is disqualifying."

He added, "The Senate should exercise its duty of advice and consent and reject this nomination."

McCain's decision will certainly influence the debate, but it may not block Haspel's confirmation. The 81-year-old senator was diagnosed in July with glioblastoma, an aggressive brain cancer. McCain left Washington in December and hasn't yet been able to return.

The GOP's narrow hold on the Senate, 51-49, has been further slimmed with McCain's absence. But there might not be a repeat of that dramatic moment last summer when he returned to Washington to cast the deciding "no" vote that shelved the GOP's plan to undo the Affordable Care Act, or Obamacare.

Haspel appears to be gaining support. At least one Democrat, Sen. Joe Manchin of West Virginia, announced he would vote in her favor. Vice President Mike Pence can be relied on to break a tie. And McCain's close friend and longtime ally, Sen. Lindsey Graham, R-S.C., has said he expects Haspel will be confirmed.

"Like many Americans, I understand the urgency that drove the decision to resort to so-called enhanced interrogation methods after our country was attacked," McCain said Wednesday.

Haspel, he said, was offered an opportunity to explain her involvement and "account for the mistakes the country made in torturing detainees."

McCain said he remained unsatisfied with Haspel's responses. "As I have argued many times, the methods we employ to keep our nation safe must be as right and just as the values we aspire to live up to and promote in the world," he said.