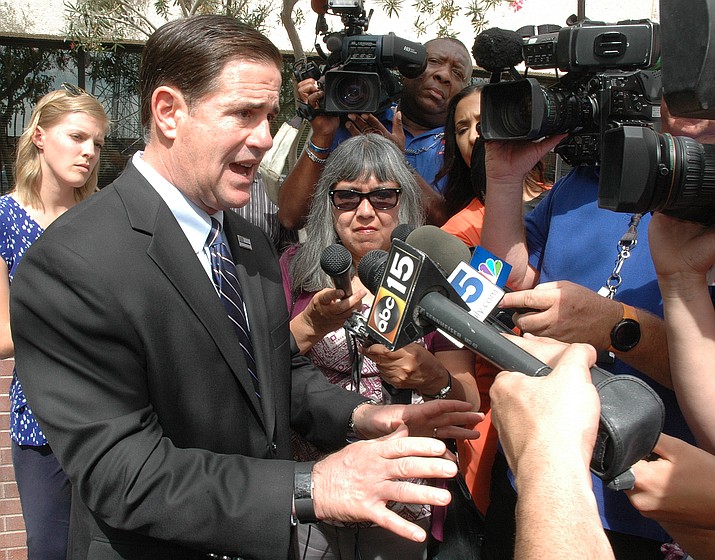 Gov. Doug Ducey is disappointed that the Legislature killed his school safety plan.

PHOENIX – Undeterred by opposition from his own party, Gov. Doug Ducey is determined to make another bid this coming year to let parents and school officials ask judges to take guns away from people who are a danger to themselves or others – assuming he’s still governor.

In an interview with Capitol Media Services, the governor said he is disappointed that the Republican-controlled Legislature first diluted and ultimately killed his school safety plan.

He still contends that the package was not only comprehensive but fair to everyone concerned. And Ducey said he believes that the plan would help ensure that the mass school shootings in other states do not happen here.

Even before Ducey could get his proposal printed up, the governor had to jettison some key provisions because of GOP criticism. That included making adults liable when children get hold of unattended weapons and tightening up the ability of criminals whose civil rights were restored from also getting back their ability to own guns.

And by the time the measure got out of the Senate, the keystone of the plan – allowing judges to issue Severe Threat Orders of Protection – had been curbed so that only police could pursue such court action.

Ducey sniffed at that contention.

“What laws have been broken if you’re scared of someone?’’ he asked.

And even what was left after the Senate got done with the bill could not get a hearing in the House. Eddie Farnsworth, R-Gilbert, who chairs the Judiciary Committee said he had issues with the plan, not just the issue of forcing someone to surrender weapons but allowing a judge to order people locked up against their will for a mental evaluation.

So the session ended with the bill dead, and Ducey having to be content with getting some additional dollars in the budget for mental health issues including suicide prevention.

The governor conceded he shares at least some of the blame for the failure of the plan.

That starts with the fact that Ducey did not unveil his package until March 19, more than two months into the session. Meanwhile there were other unforeseen events.

“I believe we would have been able to get more of the school safety plan had our priorities not changed in April, that we wanted to focus on teacher pay,’’ he said. So look for Ducey to reintroduce the plan in 2019 when the session starts in January.

Smith who is running for Congress will be gone. And there could be other turnover among incumbents.

But it remains to be seen whether Ducey, if he is reelected, can push such a plan through what could still be a Republican-controlled Legislature.

The big sticking point are those STOP orders and the whole idea that someone could be brought into court, ordered to undergo a mental examination and forced to surrender all weapons based on a complaint by someone else. Ducey said this isn’t just his idea.

“This law was brought together by superintendents and principals and teachers,’’ the governor said, people who want to remove guns from dangerous people before they show up at a school.

And Ducey said there are clear examples of why STOP orders – and allowing those other than police to seek them – make sense. Start with Florida and the shooting death of 17 students and faculty at Parkland.

“Nikolas Cruz had 39 visits from social services, was identified by name to the FBI, and actually posted on YouTube that this was something that he wanted to do,’’ the governor said.

“There was nothing they could do,’’ he continued. “There was no law that allowed them to do anything.’’

Ditto Jared Loughner who killed six and seriously wounded others in 2011, including then-Congresswoman Gabrielle Giffords who was meeting with constituents in the parking lot of a Tucson Safeway, Ducey said.

“Similar things happened with him at Pima Community College,’’ he said.

Part of what may be working against the kind of legislation Ducey is proposing is that Arizona has not had the kind of school shootings that have plagued other states. The governor said that’s irrelevant.

“Why would this only be the focus in response to one of these school shootings?’’ he asked. “Why can’t we do something proactively?

But Ducey sidestepped repeated questions about whether gun-rights groups like the National Rifle Association and the Arizona Citizens Defense League, both of which raised questions about the package and forced changes, are barriers to getting this kind of legislation passed.

“I believe we can get the full school safety package passed,’’ the governor said. And if there’s a problem with that, “the onus is on us as elected leaders, the onus is on the Legislature to make the right vote.’’

While Ducey’s plan was having some problems getting votes among some Republicans, the governor showed little interest in actively pursuing votes from Democrats. They opposed the package because it lacked some things they wanted, like universal background checks and a ban on “bump stocks’’ that can convert a semi-automatic rifle to the equivalent of a machine gun.

But the governor said those issues never came up when he was meeting with those who helped him craft the package. He said they were more interested in “pragmatic issues that would actually avoid this type of shooting.’’