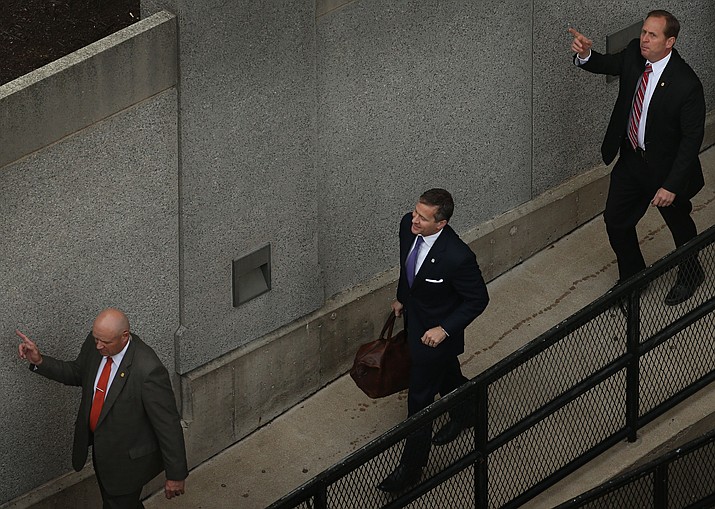 Flanked by security guards, Missouri Gov. Eric Greitens, center, arrives at court for jury selection in his felony invasion of privacy trial, Thursday, May 10, 2018, in St. Louis. Greitens is accused of taking an unauthorized and compromising photo of a woman with whom he had an affair. (David Carson/St. Louis Post-Dispatch)

ST. LOUIS (AP) — Missouri Gov. Eric Greitens appeared in court Thursday as jury selection got underway in a criminal trial accusing him of taking a compromising photo of a woman with whom he has acknowledged having an affair.

The Republican governor faces the potential of prison time if convicted of the felony invasion-of-privacy charge but has consistently denied any criminal wrongdoing. The trial is expected to last through next week.

Jury selection was taking longer than anticipated. St. Louis Circuit Judge Rex Burlison, prosecutors and Greitens' attorneys had planned to work through two sets of 40 prospective jurors during the first day of jury selection. They were still working on the first group at the end of the day.

Ten prospective jurors have been retained for further questioning next week. Twelve have been released, 10 of them for expressing negative views of Greitens.

One questioned Greitens' truthfulness and another was aware of legislative discussions about his possible impeachment. One dismissed woman had described an unspecified Greitens campaign ad as "kind of a jerky thing to do" but had said she could be impartial during his trial.

Greitens, 44, listened attentively to the questioning, occasionally taking notes. Attorneys are sorting through as many as 160 potential jurors.

Greitens arrived at the courthouse through a back entry and was greeted with a handshake and hug by a local law officer who was waiting there for him. The governor, who often wears blue jeans at the Capitol, wore a suit and tie for his trial.

He is accused of taking and transmitting an unauthorized photograph of a blindfolded and partially naked woman while she was bound to exercise rings in the basement of his St. Louis home in 2015, before he was elected. The woman, a hairdresser with whom Greitens has admitted having an affair, told investigators she saw a flash through the blindfold and heard what sounded like a photo being taken.

Greitens allegedly told her, "You're never going to mention my name, otherwise there will be pictures of (you) everywhere."

The woman, whose name has not been released by authorities, said she became upset and that Greitens later told her he deleted the picture. Prosecutors acknowledged in court this week that they have not found such a photo. Greitens has repeatedly declined to say whether he took a picture.

The penalty for first-degree invasion of privacy in Missouri is up to four years in prison.

In addition to the invasion-of-privacy case, Greitens faces a separate criminal charge of tampering with computer data for allegedly disclosing the donor list of The Mission Continues to his political fundraiser in 2015 without the permission of the St. Louis-based veterans' charity he founded. No trial date has been set yet.

The Legislature also is to convene in special session May 18 to consider whether to try to impeach Greitens. That session could last up to 30 days. If Greitens were impeached, the Senate would appoint a panel of judges to preside over a trial on whether to remove him from office.

Attorneys representing the governor's office said Thursday that they want the House to establish rules allowing for public hearings in which Greitens' attorneys can call and question witnesses and present evidence, similar to what would occur in court. During typical legislative hearings, only those lawmakers who are members of the committee question witnesses.

"The notion of potentially disciplining a governor is an incredibly rare and serious thing," said Ross Garber, a Washington-based attorney hired to represent Greitens' office. "It needs to be done solemnly and carefully and in a way that is fair and the public accepts the results."

Garber is being paid $320 an hour from taxpayer funds. The Graves Garrett law firm in Kansas City also is representing the governor's office at a rate of $340 an hour. Greitens also is being represented personally by the Dowd Bennett law firm from St. Louis, which is handling his criminal defense.

A special House committee investigating Greitens has so far conducted nearly all of its work in secret while publicly releasing two reports containing allegations against Greitens of sexual misconduct and misusing charity resources for political purposes.

House Speaker Todd Richardson said parts of the investigation — such as interviewing witnesses whose names had not publicly been released — had to be done privately.

"But as we move into special session those things will be conducted in a very open, transparent manner," Richardson said.