Life throws Skubal a curveball, but Academy grad makes the best of it 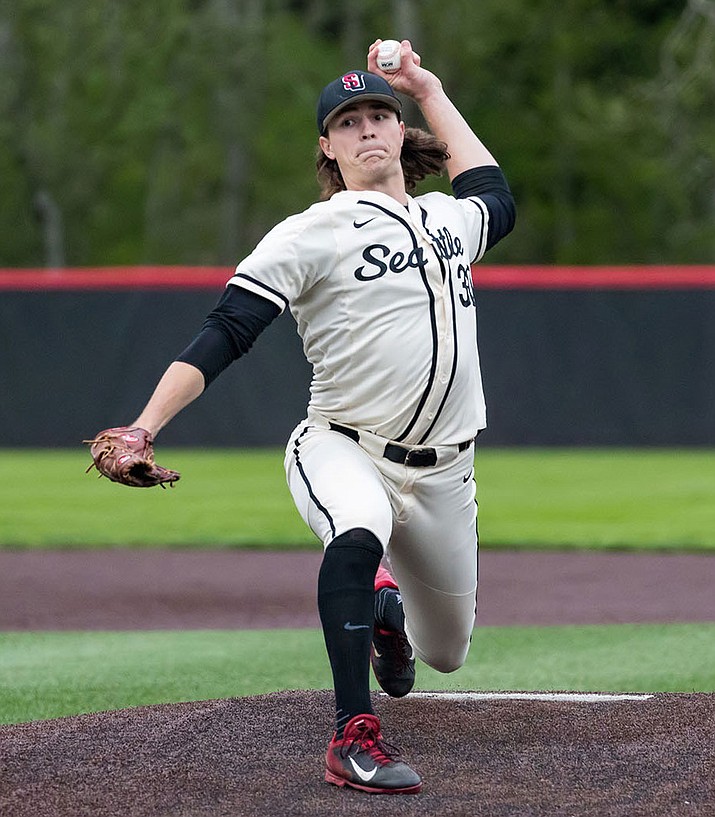 Seattle University’s Tarik Skubal is back to 100 percent after missing the 2017 season due to Tommy John surgery.

KINGMAN – Tarik Skubal didn’t know it then, but the Tommy John surgery that forced the Kingman Academy High School graduate to miss his junior year at Seattle University was a blessing in disguise.

The redshirt junior left-hander feels that his velocity is better and his pitches have improved since the surgery. The time away from the game allowed him to mold himself into the player he is today.

That fact has been on display this season for the Redhawks, as Skubal is 7-1 with a 3.78 earned run average along with 91 strikeouts in 69 innings pitched.

However, that doesn’t mean Skubal had a seamless transition back into game shape. He already has a career-high 53 walks after only walking 27 during his freshman year.

“I was trying to be too perfect,” Skubal said. “I wasn’t competing enough and that’s where I had to switch my mentality. Physically I was ready to go, but my mentality wasn’t right because I was expecting too much out of myself.

“So I kind of got back to just competing, going out there and having fun and giving it everything I have,” he continued. “That obviously leads to strikeouts with executing pitches and counts, getting ahead and sequencing hitters – which is all the stuff I was able to learn about with a year off from baseball.”

Not only did Skubal become a more talented pitcher with a season off, but he was also able to make the right call to return to school.

The Arizona Diamondbacks selected Skubal in the 29th round, but he doesn’t regret his choice to play another year of college baseball.

“I think I made the right decision to come back and prove who I am and get better,” Skubal said. “The coaching staff and the players around me have made the decision a very easy one. I have a great coaching staff and there are a lot of kids on my team that I’ll be friends with for the rest of my life. It’s been a great experience and I wouldn’t change that for anything.”

The bond has proven instrumental for Skubal and the Redhawks as they are in a battle for the top seed in the Western Athletic Conference Tournament set for May 23-27 at Hohokam Stadium in Mesa.

Seattle U is in fourth place right now, but a three-game series starts today at home against first-place Grand Canyon University.

“Our team is very talented this year and that’s kind of why I wanted to come back – to be part of that and help our team win,” Skubal said. “That’s my goal – to make a regional. That’s been my goal all four years. I think we have a really, really good chance of doing that this year. And that’s what I’ve been working hard for and that’s what the team has been working hard for.”

A strong finish to the season and a good showing in the WAC Tournament are top priorities for Skubal, but there is also something else in the back of his mind.

“I’d be lying if I said I don’t think about it, but I try not to get too caught up on it,” Skubal said of starting his professional career. “I have a lot of stuff that I want to do first – focusing game-by-game and the conference tournament is obviously extremely important. Then just kind of let that stuff play out. But of course, I’d love to start my professional career.”

That drive to play at the next level is even more so important because one of his closest friends Dylan File is shining for the Wisconsin Timber Rattlers.

The Kingman native is 5-1 with a 3.10 earned run average along with 36 strikeouts and only nine walks in 40.2 innings of work this season.

“It’s really cool and I’m always rooting for him to have success,” Skubal said of File. “Obviously I think he’s really good and very talented. It was just a matter of time for him to have games like this. And there will be a lot more games in the future like this because of the stuff he has (on the mound).”