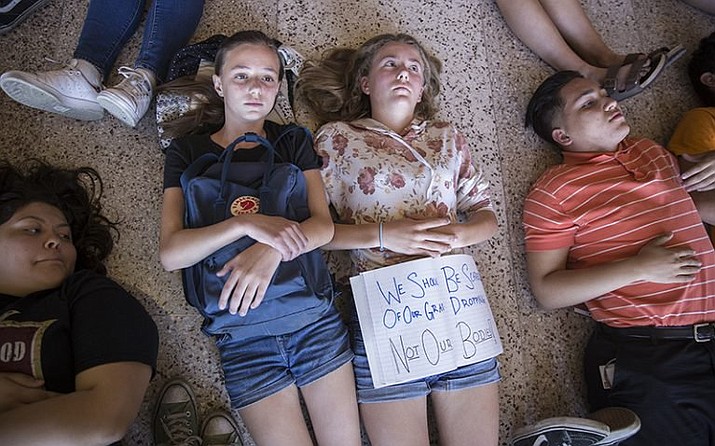 Sisters Grace, 15, and Imogen, 12, Dietz lie down on the floor of the Senate as part of a protest calling for a dialogue with Republican politicians on gun control in April. The words displayed on the notebook read, “We should be scared of our grades dropping, not our bodies!” (Photo by Jenna Miller/Cronkite News)

PHOENIX (AP) – Yamile Martinez choked back tears as she talked about the life of Shana Fisher, a 16-year-old killed in the mass shooting at Santa Fe High School last week. She never knew the teenager who died more than 1,200 miles away, but Martinez wept over the reality that Fisher would never go to prom, or head off to college.

"Her dream was to be an artist," Martinez said.

Martinez was among the Phoenix-area students who spoke about the Santa Fe victims during a March for Our Lives Arizona vigil. The candlelight ceremony drew about 150 students, parents and community members with a twofold goal – to commemorate the lives of the latest killed in their classrooms and reiterate a push from Democratic lawmakers urging Gov. Doug Ducey to call a special session to address gun violence.

Lawmakers ended their session earlier this month without passing Ducey's proposed school safety legislation. His plan would increase mental and behavioral health resources for schools, and add school resource officers. It would also create a new way to petition courts to prevent a dangerous individual from accessing guns.

While Ducey has said he's committed to seeing his plan passed, it's unclear whether he'll bring lawmakers back to the Capitol this summer. Ducey's spokesman Daniel Scarpinato said Monday the governor was "very disappointed" that the plan didn't get passed this session, and that he's open to calling lawmakers back for a special session providing they're willing to work.

"We're going to continue fighting to get the plan done and get it passed, but we want solutions," Scarpinato said. "We want people to get to work, and get something done. What we don't need is just political grandstanding."

Scarpinato said the plan included ideas that had been supported by Democrats, but it received only Republican support when it passed out of the Senate this spring – and then the House of Representatives didn't take it up for a final vote. In the wake of Santa Fe, Democrats in both chambers called on Ducey to bring lawmakers back to address gun violence. A letter from the House Democratic caucus called Ducey's plan watered down by the gun lobby, and urged stricter measures.

"This is a moment for political courage," the letter said. "You now have another opportunity to lead."

Speaker of the House J.D. Mesnard through a spokesman on Monday declined to comment on the calls for a special session.

Ducey's office says his plan – drafted after the Parkland, Florida school shooting – had input from health professionals, educators, law enforcement and students – Scarpinato said he didn't know if any of those students were involved with March for Our Lives.

Jacob Martinez, a 17-year-old organizer, was one of the students who demonstrated outside Ducey's office earlier this year but never got to meet with him. He also said he left a leadership role in a teen Republican organization because of a lack of action on gun violence.