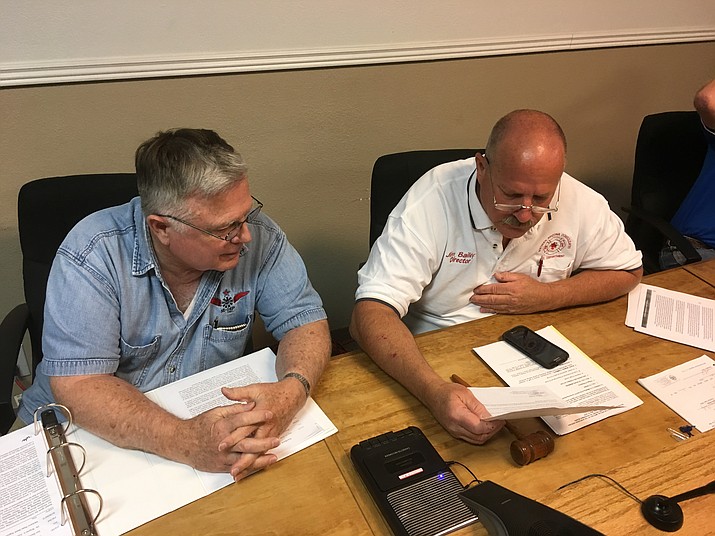 With newly appointed directors Carl Hays and Erik Berg attending their first meeting, the board voted 4-0 to terminate Eder’s contract, which was set to expire Dec. 6. His salary was about $95,000 a year.

Rhoades said no water source had been supplied at the Snavely fire, noting that a NACFD water tender arrived at the fire with an empty water tank.

That was a “huge screw-up,” Bailey said. “To have a tanker show up with no water is inexcusable.”

The incident on Casey Lane involved mutual assistance from Kingman Fire Department, and again there was an alleged problem with water supply. Also, a NACFD firefighter said he would “get in trouble” if he handed command of the fire over to KFD, according to the letter.

“As far as I’m concerned, this letter alone is enough justification for termination,” Hays said. He also spoke of Eder’s “willingness to make things up.” Hays is upset because he believes Eder told others that Hays said Eder was harboring an arsonist, which Hays denies.

“This was the final straw to me,” Hays said. He made the motion to terminate Eder’s employment immediately.

It’s the last straw for Jay Fleming, too. A volunteer firefighter in Chloride, he stormed out of the meeting after Eder was fired and returned Thursday to turn in his gear, but the office was closed.

“Chloride now loses the closest response they’ve had in years,” Fleming said. “I was also disappointed in Jim Bailey’s knowledge of what an EMR or Emergency Medical Responder’s skills were.”

Bailey said he spoke with one of his contacts at Kingman Regional Medical Center about NACFD staff being trained in EMR, and was told they don’t meet qualifications to be Emergency Medical Technicians, or EMTs.

Bailey said he also went to the Mohave County Elections Department to verify oaths of office and saw Eder at the department.

“He’s more interested in causing problems for the board than being out here doing his job,” Bailey said. “He’s been attacking us for a year.”

Eder, who previously served as NACFD fire chief from 2003-2008, was rehired in March 2017 and went through a year of acrimonious bickering among the board.

He was indicted by a grand jury for conflict of interest regarding the repair of a NACFD fire truck at a shop in Valle Vista owned by former director Vic Riccardi.

Both Riccardi and director Sue Wilkin, who issued a $1,357 check for the repairs, pleaded guilty to conflict of interest and were forced to resign from the board.

After Hays and Berg were appointed as replacements in April, board Chairwoman Patti Lewis turned in her resignation.

She said Bailey and Collins have “worked to destroy” the fire district by allowing former Fire Chief Pat Moore to close fire stations, failing to maintain and repair vehicles and equipment, leaving vacant positions unfilled and driving staff morale “into the ground.”

“I tried to be friendly with all the board members, but the union members were hateful, so I backed off,” Lewis said in her letter of resignation.

She said she refuses to be involved with a board that “insists on placing the public in jeopardy while violating state and federal laws.”

Collins said Eder made it “pretty clear” that he couldn’t work with the board. “That’s my opinion,” he said.

Bailey said Eder has never indicated that he wanted to keep his job or work with the board. He made a lot accusations with no proof. “I think that’s a problem,” Bailey said.

The fire district board tabled an action to retain legal representation until it receives more information. Collins said he reached out to Bill Whittington and Charlotte Wells, who formerly represented NACFD.

NACFD Fire chief feels pressure from board, expects to be fired
Former fire district board member leads drive to recall current board members
Back to square one after NACFD fire chief applicants fail assessment
Fire district to select recruitment firm for chief
NACFD chief complains to AG about board actions