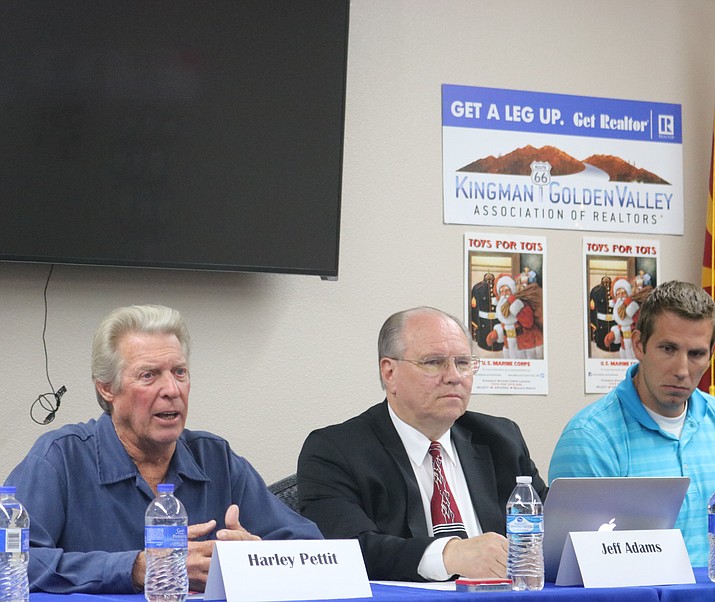 KINGMAN – What can be done about the Kingman area’s water issues? Where do the two proposed interchanges of Kingman Crossing and Rancho Santa Fe Parkway fall on Council candidates’ lists of priorities?

When it comes to securing Mohave County’s and Kingman’s water, Nelson said the first steps are to bring the issue to the state level and make it an immediate area of focus.

“We need to actually be talking at that level and get them to understand where we’re at and what we’re doing,” she said. “The scary part right now is that at the state level they’ve already got plans, and they’ve got plans for our water.”

Pettit called attention to farms in the area filing for bankruptcy. He suggested bidding on those properties.

“We can put it back up for sale with effectively a CCR about water usage, or, we could put it on a 99-year lease and control our water for 99 years,” Pettit said. “I’ve already been working trying to persuade the county to help me out with this idea and take control of our water.”

Adams said the area needs to utilize monitoring wells in addition to working with the county.

“We certainly need to get local control away from the state,” he said.

Addressing the water issue is one of the main platforms on which Holtry is running for Council.

“One of the biggest things that we can do right now, I believe the City is already doing it, is they’ve entered into a partnership with the county and are working on a study to see what the water level is and how much water is being taken out so we can take that to the state and explain to them how we could be losing quite a bit of water, and we could be in some trouble,” he said.

That research can be taken to the state, he said, to hopefully get water-related state statues changed.

Yocum advised “smart use, planning and conservation” when it comes to water. He mentioned that retention basins and reinjection wells would help recharge and reduce withdrawal from the aquifer. Yocum also recommended considering a rural management district and limiting farming to areas with naturally recurring water.

The candidates also spoke about the two interchange projects currently underway in Kingman. Pettit focused on Kingman Crossing, saying he isn’t against it, but would feel better about the interchange if Kingman citizens had voted on it.

Adams said both interchanges are a must for the City of Kingman and would help the City realize its potential as an inland port, intermodal hub and tourism gateway.

Holtry called jobs the lifeblood of cities. He pointed to Rancho giving direct access to the airport and industrial park, and potential amenities being brought to the City via Kingman Crossing.

Yocum supports both interchanges, adding that ADOT does as well, and said they are each needed for different reasons.

“Kingman Crossing for retail purposes and to supply services that medical personnel at the hospital are interested in having here, as well as Rancho Sante Fe parkway for airport development and the next phase of industrial development,” he said.

Nelson said she is in complete support of interchanges, but that she has a problem with Rancho falling on the shoulders of taxpayers. She added that an agreement with Kingman Regional Medical Center for the Kingman Crossing interchange could have been accomplished some time ago.

Balloted-candidate Ken Watkins and write-in candidate Tanya Jordan were unable to attend due to prior commitments, but submitted statements to the forum.

Watkins wrote he has witnessed both good and bad from Kingman’s elected officials over the years. He added some of those officials honorably represent their constituents, but others “selfishly follow their own personal interests.”

“I support Proposition 413 for this reason,” he wrote. “The sales tax increase was hastily passed without the voters properly educated and now the current City Council is facing a backlash. To make it worse, there are certain members of the council who are very critical of anyone who dare question their decision.”

Jordan, who got involved with the local Republican party when she moved to Kingman in 2008, wrote that in the past few years she has begun to focus more on Kingman itself rather than the party.

“I support both interchanges and the I-11 project that will help bring industry and better-paying jobs to the area,” Jordan wrote. “I also feel strongly in working to fight companies coming in to take our water out of Mohave County.”

She does not support Prop 413, the Responsible Sales and Use Tax Act, and advocates for “yes” votes on the Home Rule Option.

Voters, get ready. The general election, and the electorate’s chance to determine the makeup of the next City Council, is Tuesday.