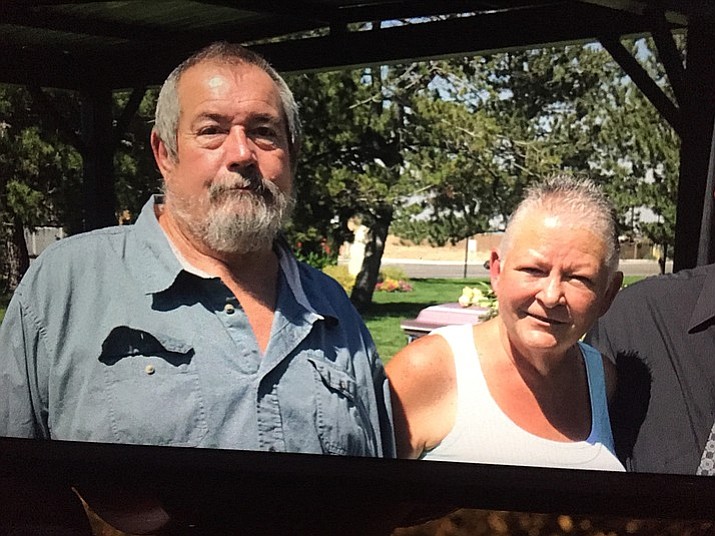 Jerry and Susan McFalls of Littlefield. The couple were last heard from Jan. 11 before two sets of human remains were found Oct. 18 near the Virgin River Gorge in the Arizona Strip Area. One set has been identified as Susan McFalls. The second body has not been ID'd. (Courtesy)

KINGMAN – Authorities say they have identified one set of human remains that were discovered Oct. 18 near the Virgin River Gorge in the Arizona Strip Area.

Two sets were discovered that day, and the one set has been identified as Susan Marie McFalls, 63, of Littlefield. Medical examiners made a positive identification by comparing medical records and a medical device located along with the remains.

The second body has not been ID’d, and both sets of remains have been sent to the FBI Crime Lab for scientific examination.

Jerry and Susan McFalls were last seen at their residence in Littlefield on Jan. 11, and were reported missing Jan. 21.

Cadaver dogs and drones were used to search the surrounding area, and detectives served four search warrants resulting from leads provided by people in the community in far northern Mohave County, and potential evidence has been gathered and transferred to the FBI for analysis at the time.

The following items had been recovered two months into the case by independent search parties and given to MCSO for testing:

Presumptive tests on a mattress cover that appeared to have blood spots came back negative for blood evidence. It was sent off for further testing.

Shell casings related to the incident were collected by detectives during the original search warrant. According to family members, a friend used the property for recreational shooting after the search, which left more shell casings to be discovered.

Bullet holes found in a shed were photographed during the initial search by detectives.