Election Day 2018: here’s a reminder of what’s on the ballot 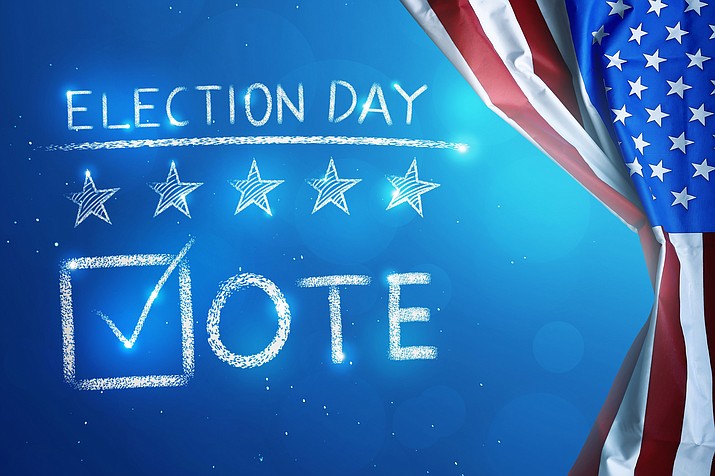 Most counties have ballot drop boxes. In Kingman, the ballot drop box is at the Mohave County Recorder’s Office – Voter Registration Division, 700 W. Beale St. Early ballots can be dropped off there or any precinct ballot box until 7 p.m., Tuesday, Nov. 6.

Precinct locations around Kingman are:

If you haven’t turned in your early ballot, your vote still counts as long as you get your ballot in any ballot box or at the Mohave County Recorder’s Office – Voter Registration Division, 700 W. Beale St., by 7 p.m. today.

This is what you’ll find on the ballot.

The four candidates on the ballot for two seats on Council are Scott Holtry, Deana Nelson, Harley Pettit, and Ken Watkins. The three write-in candidates are Tanya Jordan, Jeff Adams, and Stuart Yocum.

There are four candidates for three positions on the KUSD board: Jennifer Shumway, Carole Young, Cliff Angle, and Charlie Lucero.

The three candidates vying for two seats on the board are Stephen Pebley, Penny White, and Daniel Del Monaco.

The one candidate on the ballot for the position is Eric Gordon. The one write-in candidate is Billy Sipe.

Proposition 412 Relating to Resolution 5151-A proposing to extend the alternative local expenditure limitation (Home Rule Option) for the City of Kingman.

Proposition 413 Relating to the Responsible Sales and Use Tax Act is intended to repeal a 1 percent increase in the City’s transaction privilege (sales) and use rates and requires any future increases to this tax be approved by the people.

Proposition 126 Relating to Prohibition of Taxation of Services would amend the state Constitution from imposing new transaction-based taxes on “services” or increasing existing taxes on “services.” It does not repeal taxes, fees or assessments in effect since Dec. 31, 2017.

Proposition 305 would expand eligibility for education vouchers to all Arizona students, allowing the program to increase by one-half of one percent of the total public school enrollment each year through the 2021-2022 school year, capping enrollment at 30,000.

Prop 306 relating to Citizens’ Clean Elections Commission would prohibit candidates who participate in the Clean Elections program from making any payment to a political party or non-profit allowed to conduct election activity, and would place oversight of the Commission under the Governor’s Regulatory Review Council.

It's time - finally - to vote
Arizona voters break record for primary turnout
One final look at candidates, questions of Election 2016
5 statewide propositions on ballot; what are they all about?
Early voting for election in May begins Thursday