Arizona early voting could delay Senate outcome to next week 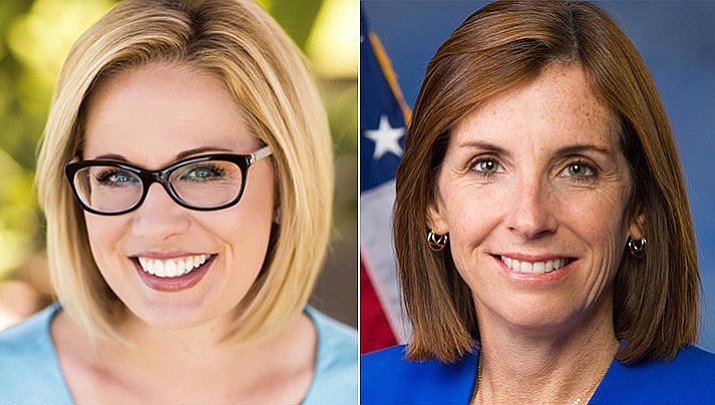 Kyrsten Sinema, left, and Martha McSally. There may not be a declared winner for the Senate seat until at least Thursday, or even next week.

PHOENIX – Arizona's nationally-watched and incredibly tight Senate race between Republican Martha McSally and Democrat Kyrsten Sinema may not have a declared winner until Thursday or even next week because, ironically, the state's voters like to cast their ballots early.

About three-quarters of Arizona voters cast ballots by mail. But many ballots known as "late earlies" arrive in the mail on Election Day, in the few days leading up to it or are hand delivered by the voters themselves. Those ballots can create logjams at the state's 15 county recorders' offices where vote counting is conducted.

All mailed ballots and the ballots that could have been mailed but were dropped off by the voters require a series of labor-intensive verifications. Voter signatures on the envelopes containing the ballots must be verified before the votes are tabulated.

McSally and Sinema were separated Wednesday by a small fraction of the tabulated votes, with hundreds of thousands of uncounted ballots still outstanding. More than 600,000 votes were uncounted in a race where more than 2 million people cast ballots. The most populous part of Arizona, Maricopa County, said it won't start releasing late earlies and some other votes until late Thursday.

The sluggish count is a perennial issue for Arizona, but has rarely received such a high level of attention because the GOP-leaning state generally has had few nationally-watched nail-biting contests.

One candidate familiar with the long wait is McSally. It took the Associated Press 12 days to name her as the loser of her first congressional race in 2012 because the margin was so narrow and vote counting was slow. McSally's second and successful bid for the seat ended with a recount in December of 2014, more than one month after the election.

McSally and Sinema scheduled no public appearances for Wednesday.

McSally tweeted early Wednesday that she was going "to bed with a lead of over 14,000 votes."

Sinema tweeted that the "race is about you and we're going to make sure your vote is counted. There are a lot of outstanding ballots — especially those mailed-in — and a lot of reasons to feel good!"

The cliffhanger Senate race comes in what's otherwise shaping up to be another banner Arizona year for Republicans. The GOP has won every statewide race in Arizona over the past decade, and Democrats were hoping Sinema could break that streak.

Republican Gov. Doug Ducey was easily re-elected over a challenge from Democrat David Garcia, a college education professor. The GOP notched victories in the Attorney General, Treasurer and Secretary of State races as well.

The picture was brighter for the state's Democrats in Congress, where Democrat Ann Kirkpatrick was elected to the Tucson-area swing district seat vacated by McSally and Democrats held all their other four seats, giving them a majority of the state's nine-member U.S. House delegation.

The election featured heavy statewide turnout of about 60 percent, more in line with a presidential election than a midterm — part of the reason county registrars were overloaded with uncounted ballots.

The Senate contest was the marquee race, featuring two champion fundraisers who are no strangers to tight races. They are battling over the seat vacated by Sen. Jeff Flake, a Republican who decided not to run for re-election because he realized his criticism of President Donald Trump made it impossible for him to survive politically.

Sinema, 42, is a former Green Party activist who became a Democratic centrist with her first election to the House of Representatives in 2012.

In response, McSally criticized Sinema over her shifting views, contending she was still a closet liberal who disrespected the military. Republican ads publicized a 2010 video of Sinema repeating a comedian's description of Arizona as "the meth lab of democracy."