Ducey beats Garcia in race for governor by double figures 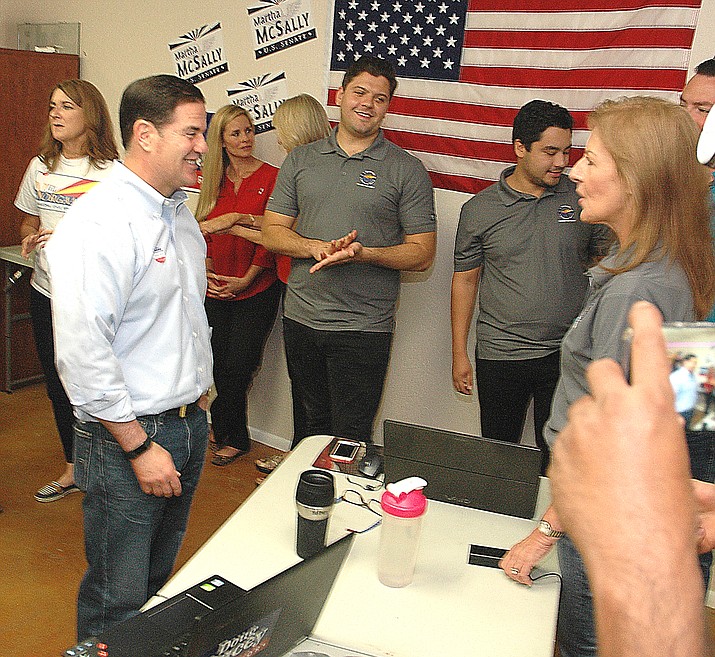 Ducey, seeking a second four-year term, has a strong lead with 99 percent of the vote counted.

Garcia had been counting on education being the prime issue in the campaign. But Ducey, who until earlier this year had offered only small increases in education funding, managed to defuse the issue with his proposal for a 19 percent increase in teacher pay by 2020.

Ducey also was the beneficiary of news reports of a "caravan'' of Hondurans headed for the U.S. border.

The governor staked a claim on the issue of border security, complete with establishing a Border Strike Force. And he weathered reports that some of that organization's claimed arrests and drug seizures actually were just routine police operations.

Garcia, in the meantime, was videotaped at a speech in New Orleans telling his audience, "Imagine no wall, no wall in Southern Arizona.''

The Democrat said he was arguing against the proposal by President Trump to add additional walls and fencing, not to tearing down existing barriers. But the video of the tape proved damning.

It also did not help that Garcia called to "replace'' of Immigration and Customs Enforcement, the agency charged with dealing with undocumented immigrants in the country, with "an immigration system that reflects our American values.'' Ducey and his allies translated that into a call to "abolish'' ICE.

Even Garcia's pointing out that Ducey has yet to live up to his promise for 24/7 Department of Public Safety patrols on all Arizona roads did not gain much traction.

And there's something else.

In counting on education being the prime focus, Garcia backed an initiative that would have raised $690 million a year for public schools through an increase on income taxes of the state's most wealthy. Garcia said those revenues were needed to ensure there actually were dollars available to fund Ducey's promise of higher pay for teacher.

But a day after Garcia won the Democratic primary over Steve Farley, the Arizona Supreme Court knocked the Invest in Ed measure off the ballot, with the justices concluding that the description of the initiative provided to voters was misleading.

That left Garcia with no specific funding proposal for schools other than to say he would work with lawmakers, giving Republicans a chance to argue he had no plan.

"The campaign was about ideas and policy,'' Ducey told cheering supporters Tuesday night. "The contrast could not have been more clear.''

But Garcia never could come close to the money behind Ducey.

As an incumbent, Ducey raised $9.7 million from one committee, giving $5.1 million of that to the Arizona Republican Party to spend to elect candidates - himself included. Another more than $3 million was transferred into his direct reelection effort, bringing the total available to him in that account to more than $6 million.

But the real cash - more than $9.5 million - came from the Republican Governors Association which ran the attack ads portraying Garcia as weak on immigration and crime, allowing Ducey to pretty much limit himself to commercials extolling the improvements in the state's economy under his watch.

Garcia, however, got no financial help from the Democratic Governors Association as that organization chose to spend its dollars elsewhere. That left him with $2.1 million he collected on his own; his largest share of outside cash was the $783,000 spent by NextGen Climate Action PAC run by California billionaire Tom Steyer.

Border issues aside, Ducey benefited from a generally strong economy, with job and tax growth here running at rates ahead of the national average even though the state's unemployment rate is a full point higher than the rest of the country and wages here are less than elsewhere.

Those additional revenues are what allowed Ducey to claim he could finance the hike in teacher pay without having to resort to tax hikes.

That wasn't exactly true, as the plan the governor pushed through the Legislature actually involved increasing the vehicle license fee. That, in turn, enabled Ducey to use state funds now going to fund the Highway Patrol into his other priorities like education.

Garcia, however, failed to make that an issue.

And then there were a series of small problems that, while individually not huge, mounted up.

A Garcia staffer quit after some tweets were unearthed, one with an obscene message to Arizona going back to 2012 after the election that year.

And the Ducey campaign machine even turned positives for Garcia, like a visit of support and endorsement by Bernie Sanders, into suggesting that's like being endorsed by Elizabeth Warren, Al Gore or Michael Moore.

Yet Ducey seemed to be coated with Teflon over his own missteps, like accusing Garcia of trying to "rig'' an election based on that Supreme Court decision to knock the Invest in Ed income tax measure off the ballot as misleading. Ducey never apologized even after he provided no evidence that Garcia was involved in crafting the now-defunct measure.

Ducey said Tuesday night that his victory does not mean the end of new state dollars for public education.